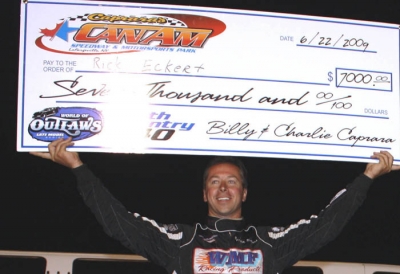 Rick Eckert picked up his second WoO win of '09. (turn4photos.com)

LAFARGEVILLE, N.Y. — Rick Eckert was apologetic to the standing-room-only crowd that watched him win Monday night's World of Outlaws Late Model Series North Country 40 at Can-Am Motorsports Park. The 43-year-old from York, Pa., had, after all, dashed what would have been a wildly popular victory party for Tim McCreadie, the local-boy-who's-made-good from nearby Watertown, N.Y.

“I know I beat the hometown favorite,” said Eckert, who passed McCreadie en route to the front of the field and crossed the finish line 1.439 seconds ahead of the 2006 WoO LMS champion. “But we're buddies, so I don't think it's that bad. Hopefully nobody's mad at me for winning tonight.”

The huge throng of fans that attended the first-ever WoO LMS event at the half-mile oval didn't have a problem with Eckert, who registered his second triumph of 2009 on the national tour. He became the third driver with multiple victories on this year's series, joining Steve Francis of Ashland, Ky. (five wins) and Josh Richards of Shinnston, W.Va. (three wins, including the previous two on the Great Northern Tour).

Driving his familiar Raye Vest Racing-J&K Salvage Bloomquist Race Car, Eckert marched methodically forward from the fifth starting spot in a race that was slowed by just two caution flags during the first five laps. He grabbed the lead from a fading Francis on lap 28 and never looked back on his way to a paycheck worth $7,650.

McCreadie, 35, overtook Francis for second one circuit later and soon closed within a couple car lengths of Eckert, but he lost ground once Eckert cleared lapped traffic and settled for a runner-up finish in the Sweeteners Plus Rocket Chassis. It was the second consecutive bridesmaid finish for McCreadie, who returned to the cockpit last Thursday night after being sidelined for five months with a back injury.

T-Mac's Sweeteners Plus teammate, 2008 WoO LMS Rookie of the Year Vic Coffey of Caledonia, N.Y., made a late charge to finish third in his Rocket, less than a car length behind McCreadie at the checkered flag. It was a career-best WoO LMS run for the 2007 DIRTcar big-block Modified champion at Can-Am, who started sixth but didn't come alive until his machine's hard tires heated up.

Tim Fuller of Watertown, N.Y. — like McCreadie, a North Country native who spent the early days of his racing career competing in Can-Am's DIRTcar 358-Modified division — finished fourth in his Gypsum Express Rocket and 11th-starter Clint Smith of Senoia, Ga., scored a season-best finish of fifth after overtaking Francis for the position on lap 37.

Francis, who started second and outgunned the polesitting McCreadie for the lead at the initial green flag, fell to sixth in the final rundown after leading laps 1-27. He built an advantage that reached nearly three seconds before a run-in with a lapped car sent him high in turn two on lap 22 and his soft-compound tires gave up on the hard surface.

Eckert nailed his tire selection, using hard-compound Hoosier rubber that proved to be perfect for the conditions. It took plenty of deliberation, however, before Eckert bolted on the tires.

“It was tough for everybody because we were at a racetrack where nobody's ever raced with open tires,” said Eckert. “We kept going back-and-forth on our tire choice. We changed the tires three times before going on the track – twice after the (eight-minute lineup) horn (was blown).

“It took about 10 laps until I knew we made the right decision. I wasn't spectacular (at the start), but then I started getting better and better and I was like, ‘Man, they're sort of in my way now.' ”

Using the inside lane, Eckert slid by McCreadie for third on lap eight and overtook Fuller for second on lap 27. One circuit later Eckert surged past Francis to gain control, but he never relaxed.

“I kept looking at the scoreboard and I saw that 39 (of McCreadie) there in second,” said Eckert. “One thing about Tim McCreadie is he gets better every lap, so I knew I couldn't make any mistakes.”

While the partisan crowd's hopes of a dramatic McCreadie victory were raised when he got close to Eckert in lapped traffic, McCreadie didn't have enough speed to please his public.

“That lapped traffic held him up and let me get close,” said McCreadie, who also finished second the previous night at Cornwall (Ontario) Motor Speedway. “Once he got clear of traffic at the end, he got back out to a lead. He had a harder right-rear (tire) than we did. That might have been the difference, but he was good all night so I can't complain too much.

“But second place isn't as much fun as I thought it would — especially here.”

Eckert's victory was the 18th of his WoO LMS career, giving him him sole possession of second on the tour's win list since 2004. He had been tied with 2004 WoO LMS champion Scott Bloomquist of Mooresburg, Tenn., since capturing his first triumph of 2009 on May 17 at Lincoln (Ill.) Speedway.

The race's pair of caution flags were caused by minor incidents. Tony Knowles of Tyrone, Ga., was eliminated in an opening-lap tangle between turns three and four that also involved teenagers Austin Hubbard of Seaford, Del., and Larry Wight of Baldwinsville, N.Y., and 14-year-old Tyler Reddick of Corning, Calif., slowed the action on lap five when he stopped on the inside of turn two.

Finishing in positions 7-10 was Josh Richards, who maintained his points lead despite struggling with an incorrect tire choice; Darrell Lanigan of Union, Ky., who started fourth; Shane Clanton of Locust Grove, Ga.; and Gregg Satterlee of Rochester Mills, Pa.

A field of 31 cars assembled for the historic event at the track located just 15 minutes south of the Canadian border.

The Great Northern Tour continues on Tuesday at Canandaigua (N.Y.) Speedway; June 24 at Big Diamond Raceway in Minersville, Pa.; and June 25-27 at Lernerville Speedway in Sarver, Pa. (the postponed Showdown in Sarvertown on June 25 at the $30,000-to-win Firecracker 100 on June 26-27).