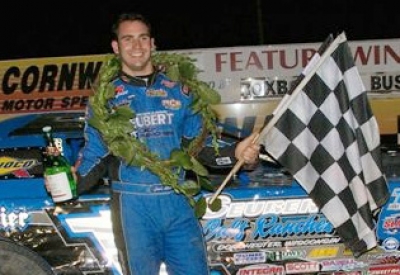 The $10,650 triumph was Richards’s third of 2009 with the World of Outlaws and gave him a sweep of the two Great Northern Tour shows run in Canada. He also won the swing’s opening event on Thursday night at Ohsweken (Ontario) Speedway.

“I like it up here,” smiled Richards, whose maple-leaf momentum was slowed only by the rainout of Saturday night’s scheduled program at Quebec’s Autodrome Drummond.

Richards, 21, was victorious before a big crowd at Ron Morin’s quarter-mile, high-banked Cornwall oval for the second straight season — and just like his win in the track’s inaugural WoO event one year ago, he overtook McCreadie for the lead and beat the 2006 series champion to the finish line.

Only a few details of Richards’s march to Cornwall’s checkered-board square were different from 2008. For the second consecutive year he started from the pole position and failed to lead the first lap, but he didn’t have to pull off any late-race dramatics as he did last year. This time he passed McCreadie for the top spot on lap 15 and never looked back.

“We did the same exact things we did last year here,” said Richards, who was behind the wheel of the new Seubert Calf Ranches Rocket car that he debuted at Ohsweken. “Even though our car was a little different style than the one we used, we ran the same setup and the same tires and it drove better than it did last year.”

McCreadie, making just his second start in the Sweeteners Plus Rocket car since returning to the cockpit on Thursday from a back injury that sidelined him for five months, challenged Richards several times during the closing circuits but settled for second place. The race’s third and final caution flag, on lap 48, gave McCreadie a final opportunity, but he crossed the finish line 0.713 of a second behind Richards.

Defending WoO champion Darrell Lanigan of Union, Ky., finished third, keeping him winless through 16 events this season. He needed just 11 laps to hustle from the seventh starting spot to third, but after threatening the leaders briefly his Fusion Energy Rocket car couldn’t quite keep pace.

Tim Fuller of Watertown, N.Y., steered his Gypsum Express Rocket forward from the 11th starting spot to finish fourth at a track he’s won at in DIRTcar 358-Modified competition, and 17-year-old Austin Hubbard of Seaford, Del., rallied to finish fifth in his Seaside Builders Rocket mount after falling from the third starting spot to ninth in the early laps.

Hubbard, who earned his second top-five finish of the 2009 WoO season, pocketed the tour’s $500 ‘Bonus Bucks’ cash for being the highest-finishing driver who hasn’t won a series A-Main and isn’t ranked among the top 12 in the points standings.

Richards did experience some anxious moments as the race wound down. He slowed drastically on lap 43 when Gregg Satterlee of Rochester Mills, Pa., slid off the backstretch and then came back on the track in front of Richards in turn three, and he had to deal with a caution flag on lap 48 after Billy Decker of Unadilla, N.Y., was sent spinning into turn one.

“I got real scared when Gregg ran back on the track right in front of me,” said Richards, whose 15th career WoO victory moved him into sole possession of fourth place on the tour’s win list since 2004. “I was committed to the bottom, so I had to slow down so much. I thought McCreadie was going to roll right by me on the top.

“That restart with two to go had me real nervous. I knew McCreadie would try everything he could to win, so I just told myself to keep running my line.”

McCreadie, 35, was simply happy to grab a second-place finish in the first feature appearance of his comeback. He failed to qualify at Ohsweken after being struck by a flat tire in his heat and consolation race.

“I was just too loose,” said McCreadie. “If we had it to do over, we would’ve tightened the car up. I couldn’t maneuver around the way I needed to. We just got beat by a better car. I think if Josh had started on the outside pole he would’ve led the whole race.”

Richards’s victory vaulted him back into the WoO points lead, which he had lost to Steve Francis of Ashland, Ky., after the May 24 event at Charter Raceway Park in Beaver Dam, Wis. Francis entered Sunday’s action sitting atop the standings by two points over Lanigan, but he finished 10th after pitting to change a flat right-rear tire on lap 32.

Rick Eckert of York, Pa., ran outside the top 10 for much of the distance but came on late to finish sixth, just ahead of Brady Smith of Solon Springs, Wis., who started 16th. Chub Frank of Bear Lake, Pa., was penalized to the rear of the field for the start after leaving the lineup to return to the pit area, but he rallied to finish eighth. Tony Knowles of Tyrone, Ga., was ninth after running as high as sixth and Francis came back from his pit stop to salvage 10th.Jordan Bland of Campbellsville, Ky., who entered the night leading the WoO Rookie of the Year points race, was transported to Hotel Diex Hospital in Cornwall after riding out a wild flip on the first lap of the second lap. His Bloomquist Race Car bounced over the berm in turn one and cartwheeled through the air, landing on its roof in the run-off area.

Bland squeezed out of the cockpit and sat on the ground talking to safety workers, but he complained of some neck pain so he was taken away for medical attention. About two hours later — after doctors found no injuries — he left the hospital and made it back to the track just in time to jump in his backup car and use a provisional starting spot. The 20-year-old then stayed out of trouble en route to finishing one lap down in 16th — good enough to earn him a $250 bonus as the top rookie in the race.

At the start of the night Francis registered his second fast-time honor of the season. His 12.429-second lap lowered the Late Model track record, bettering the lap of 13.017 seconds that Billy Decker ran last year.

The WoO now returns to the United States for six more evenings of non-stop Great Northern Tour action beginning Monday at Can-Am Motorsports Park in LaFargeville, N.Y., and continuing Tuesday at Canandaigua (N.Y.) Speedway; Wednesday at Big Diamond Raceway in Minersville, Pa.; and Thursday-Saturday at Lernerville Speedway in Sarver, Pa. (the postponed Showdown in Sarvertown on June 25 at the $30,000-to-win Firecracker 100 on June 26-27).