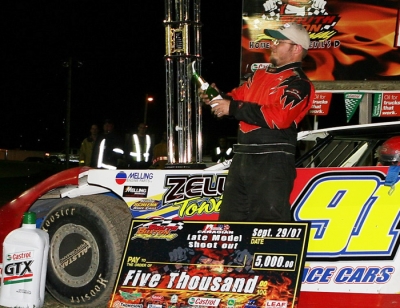 Joe Fields of Chatham, Ontario, took command at the outset and led 20 laps, but the outside front-row starter was caught up in a backstretch accident that knocked him out of the race. Brian Ruhlman of Clarklake, Mich., inherited the point while the seventh-starting Schlenk and Jayme Zidar of Greenfield, Wis., took up the chase.

Schlenk's winning move came on the frontstretch and he took over on the 29th lap for a lead he'd never give up. Ruhlman settled for second and Zidar, a former winner of the race, was third. Dusty Moore of Swanton, Ohio, and fast qualifier Andrew Reaume of Blenheim, Ontario, rounded out the top five in a race slowed by four cautions.

Schlenk's Rayburn Race is sponsored by Zeller Towing and Markey Ambulance Rental. ... Andrew Reaume's fast qualifier time was 15.59 seconds and 11 drivers were under the 16-second mark. ... Reaume also won the dash for cash and a heat race. ... Other heat winners were Schlenk and Jayme Zidar. ... Kirk Hooker won the consolation race. ... The total purse was $20,000. ... The event drew 4,000 fans. ... Sixteen of 22 starters were running at the conclusion of the main event, 14 on the lead lap. ... Last year's winner, Curtis Roberts of Coleman, Mich., didn't attend. ... South Buxton's weekly Late Model division is sanctioned by the United Midwestern Promoters.