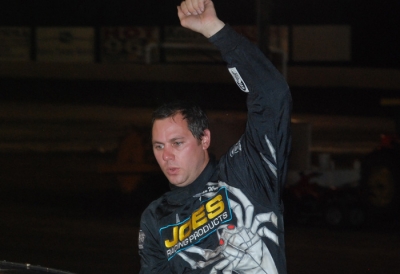 HAUBSTADT, Ind. (June 20) — Jeep Van Wormer was so ratcheted up about his lead-swapping duel with Shannon Babb at Tri-State Speedway, the Pinconning, Mich., driver initially thought he'd made the bonehead move of the night when the battle came to an end with Van Wormer's No. 55 bashing into a slowing Babb's No. 18 at the turn-four exit. | Complete Summernationals coverage

"I was barreling in there," said the 34-year-old Van Wormer, who led 11 of the first 23 laps in Sunday's seventh leg of the UMP DIRTcar Summernationals. "I thought the caution came out and I didn't see it."

But Babb had lost power in turn four when a broken transmission yoke snapped his drivetrain, and Van Wormer was relieved to discover he wasn't at fault when he pulled up near Babb's disabled car on the frontstretch during the lap-23 caution period and Babb signaled — putting his fists together with a stick-breaking motion — the reason for his demise.

"Man, me and Shannon had a heckuva battle going," the fourth-starting Van Wormer said in victory lane. "I didn't realize he broke."

While the thrilling first half of the race, essentially a two-car back-and-forth tussle with Babb and Van Wormer splitting lap-leading duties, was over with Babb's departure, Van Wormer still had plenty work to do, and he had to do it driving a car with extensive sheetmetal damage to the right side.

Fifth-starting Randy Korte of Highland, Ill., and outside front-row starter Rodney Melvin of Benton, Ill., lined up behind Van Wormer for the final restart with 17 laps remaining, and they made sure he had his hands full in the race's late stages. The high-running Van Wormer ran comfortably ahead with 10 laps remaining, but in the race's waning moments, the high-running Korte and low-running Melvin were all over the leader.

Their challenges fell short with Melvin flashing across the finish line just a car length behind the winner, who won his second Summernationals race of '09 on a quarter-mile Indiana oval. Van Wormer captured the opener at Brownstown Speedway on June 11, and he was glad to add Tri-State to his list of accomplishments.

"I hate that we tore our car up a little bit, but I'm just glad we won," Van Wormer said. "We've been fighting it a couple of days and didn't make the show last night (in Clarksville, Tenn.). You know, it just shows you can go from hero to zero in one night."

The winner wasn't aware of the challenges by Korte and Melvin, but he had plenty to worry about late in the 40-lapper.

"I started to pick up a vibration. I don't know if I got some mud in the tire or something," Van Wormer said. "I was just afraid we were going to explode the right rear (tire) or something. I was not trying to push it, just trying to get it to hold on and make it."

Melvin, who led the first four laps before the Van Wormer-Babb battle royale began, got his second runner-up finish on the series while Korte was third. Scott James of Lawrenceburg, Ind., rallied from 15th to finish fourth, although and overheating motor kept him from pressing the issue as he tried to catch the frontrunning pack in the closing laps. Jason Feger of Bloomington, Ill., was fifth for his best series finish of '09.

About half the 22-car field was running at the finish of a race slowed by three cautions. Ryan Unzicker of El Paso, Ill., spun to draw a lap-two caution, provisional starter Derek Chandler of Pontiac, Ill., got hung up on the infield tires between turns three and four on the restart. Babb's driveline problems triggered the final yellow on lap 23.

Notes: Van Wormer's Rocket Chassis has a Cornett engine and sponsorship from Globe Technologies, Bayline Fire Protection and Allstar Performance. ... Four of Van Wormer's 10 career Summernationals victories have come at Indiana tracks, including two at Lawrenceburg (Ind.) Speedway before its multimillion dollar renovation. ... The event was the only Late Model race of the year at Tri-State, formerly one of UMP's strongest weekly Late Model tracks in the early '90s. ... Also in action with the Late Models was a modified program.

Brian Shirley started on the pole and led all the way, but the final two transfer spots were a scramble among Donny Walden, Chad Zobrist and Duane Chamberlain throughout the race. The higher-running Zobrist and Chamberlain held the spots most of the race with Walden hanging tough in the low groove. As the trio took the white flag, Walden got out of shape on the frontstretch after contact with Chamberlain and entered turn one too low, going below the buried tires marking the infield. Walden stayed in the gas and went from fourth to second on the final lap, with Zobrist getting the final transfer spot. Chamberlain was fourth. Walden's foray into the infield wasn't penalized, officials ruled, because the contact forced Walden out of the racing groove.

In the draw among heat winners to set the first five spots of the feature lineup, Shannon Babb will start on the pole with Rodney Melvin alongside. Kevin Claycomb starts with with Jeep Van Wormer fourth and Randy Korte inside row three. Still to come are the C-Main (with Kenny Carmichael Jr. and Joe Morris on the front row) with four drivers transferring to the tail of the B-Main. The B-Main (with Brian Shirley and Dillan White on the front row) sends three drivers to the feature lineup.

High-running drivers came out on top again as outside front-row starter Kevin Claycomb captured the final heat over a fourth-starting Ryan Unzicker, who also ran high most of the way. Unzicker took a few low-side stabs to get alongside Claycomb, but Claycomb held on. Polesitter Donny Walden hung with the leaders down low the first few laps, but eventually lost the third spot to Scott James, who charged late in the low groove and finished inches behind Unzicker as the top three flashed across the line in a bunch.

Polesitter Randy Korte, the 2007 Summernationals winner at Tri-State, fought off stiff challenges from third-starting Terry Casey to win the fourth heat. Contact between Korte and Casey on the backstretch of the third lap briefly sent Casey's car toward the infield, but he recovered and nosed ahead to barely lead the fifth lap of the 10-lapper. But Korte got up on the wheel on the high side to get back ahead of the low-running Casey and take a narrow victory. Behind them was a race-long battle for third between Brandon Sheppard and Chad Zobrist, with Sheppard's high side carrying him to the final transfer spot. Zobrist was fourth. The first start was called back for an unfair start, the only yellow of the night so far.

Polesitter Rodney Melvin jumped into the high groove in turn three on the first lap and raced to victory. Fellow front-row starter Kevin Cole was a half-straightaway behind midway thorugh the race, but he cut Melvin's lead to nearly nothing by the final lap in finishing second. Third-starting Kevin Weaver got the third and final transfer spot but never contended with the frontrunners. Duane Chamberlain was fourth in the caution-free prelim.

Trying to shake off a sub-par series so far, outside front-row starter Shannon Babb jumped quickly to the lead and raced to an easy victory. Babb, a two-time series winner at Haubstadt ('99, '01), finished more than a half-straightaway ahead of fourth-starting Jason Feger, while Tim Lance survived a near-spin in turn four on the first lap to finish third. Polesitter Derek Chandler was fourth at the white flag, but he tangled in turn four on the last lap, giving the spot to Dillan White while Chandler unofficially lost three positions.

In a tight, seven-lap battle among the second-row starters, Jeep Van Wormer barely held off Dennis Erb Jr. for a 10-lap victory. Erb hounded him throughout before settling for second while polesitter Justin Rattliff was a close third. Erb nearly nosed ahead at the white flag and led through turn one and two, but Van Wormer's high groove carried him back ahead on the backstretch and he won by several feet. Brian Shirley was a distant fourth in the caution-free heat. Outside front-row starter Jason McBride got too high in turn two on the first lap and never recovered.

Donny Walden, who has made just two of sixth UMP DIRTcar Summernationals features, surprised a 43-car field at Tri-State Speedway by setting fast time in the seventh leg of the tour. One of the final qualifiers, the Towanda, Ill., driver clicked off a lap of 13.767 seconds at the high-banked quarter-mile oval.

Among series newcomers at Tri-State are Carnell Parker III of Clarksville, Tenn., Joe Morris of Galatia, Ill. (in a Riggs Motorsports entry), Everett Bradham of Olney, Ill., and Bobby Melvin of Benton, Ill., the older brother of series regular Rodney Melvin. ... Terre Haute, Ind., teammates Mitchell Lankford and Kenny Carmichael Jr. are also making their 2009 series debuts. ... Chris Shelton of Paducah, Ky., who has fielded a No. 16s in previous events, hot-lapped a No. 21B but missed his qualifying spot. ... Jason Smith is fielding the No. 73 previous fielded on the series by Greg Johnson of Mitchell, Ind. ... Kevin Claycomb, former full-time driver for Scott Clippinger Racing, rejoined the team at Tri-State to field a team car to Justin Rattliff. Both were fast in time trials to earn front-row starting spots in heat races.