Moyer cruises to easy $10,000 at Clarksville 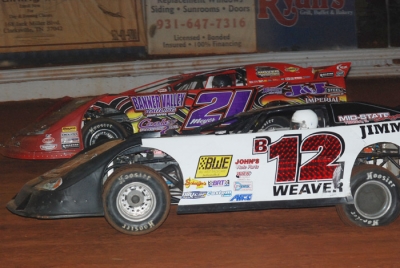 CLARKSVILLE, Tenn. (June 20) — There are occasions when Dirt Late Model racers pace themselves, letting things shake out in a feature before making their best move. Billy Moyer wasn't interested in waiting for any such developments during the sixth leg of the UMP DIRTcar Summernationals at Clarksville Speedway. | Complete Summernationals coverage

After a spate of early cautions, the fourth-starting Moyer blazed around Kevin Weaver with an outside move exiting turn two on the third lap and never looked back en route to his series-leading 66th career victory and second Summernationals triumph of 2009.

"The car, we hit it pretty close to right on there, so I figured I was just going to get going and not mess around no more," said Moyer, who earned $10,000 in the 40-lap main event at the quarter-mile oval.

The 51-year-old Hall of Fame driver from Batesville, Ark., built a quarter-track lead after 25 laps and stretched it to nearly a half-track the final 15 laps en route to an easy victory.

Seventh-starting Randy Korte of Highland, Ill., got rolling on the high side and took second from Weaver on the 27th lap, but he never seriously cut into Moyer's lead and lost ground the last 10 laps. Brian Shirley of Chatham, Ill., took third from Weaver, of Gibson City, Ill., on the last lap while third-starting Terry Casey of New London, Wis., was fifth.

Three early cautions — including one for a bizarre incident when Rodney Melvin's car ended up on its side on the frontstretch — kept Moyer from getting rolling initially, but the night's fast qualifier among 44 drivers felt good enough about his No. 21.

"Everybody was committed right to that bottom, but if you had your car nice, you could roll right around that middle without being too tight," Moyer said. "I just jumped up there and took a chance on it."

Moyer quickly left Weaver behind and avoided his only scare of the night on the 12th lap when the slower Brandon Chappell spun between turns one and two right in front of Moyer. The leader deftly evaded Chappell's machine and began building his insurmountable lead thereafter.

Korte, who restarted sixth on the 12th lap, let it all hang out on the high side to grab third by the 24th lap and second three laps later, and it appeared a caution that never came might've made things interesting with a Moyer-Korte battle.

Moyer noted Korte's advance on the scoreboard and saw signals from his crew members that he was never in serious danger of losing the lead. "I knew he must've been running pretty good, so I couldn't get lazy sitting there," Moyer said.

Melvin's wreck was the most serious incident among four race stoppages. The Benton, Ill., driver was battling door-to-door with Brent Kreke exiting turn four when contact between the two spun Melvin while simultaneously tilting his car 90 degrees. Instead of a complete rollover, Melvin's car came to rest driver's side down on its side, drawing a red flag.

Melvin was uninjured, and after track workers righted his car, he ran to Kreke's parked car in turn one to express his displeasure for Kreke's part in the accident, although officials intervened to temper the situation.

The series moves to Tri-State Speedway in Haubstadt, Ind., for a $6,000-to-win event on Sunday evening.

Polesitter Dennis Erb Jr. won the B-Main over Brian Shirley and Terry English, the other cars transferring to the A-Main. Duane Chamberlain and Jeep Van Wormer were among drivers missing transfer spots. The C-Main winners were Jason McBride and Matt Potter.

Wendell Wallace was considering a trip to seek medical help after hurting his left wrist in the backstretch accident in the fifth heat. "I might go get it X-rayed," said the former Dirt Track World Champion, standing next to his damaged Bob Harris-owned No. B1. ... Brent Kreke wasn't surprised to be battling multitime track champion Tony Albright for the lead in the fourth. "It seems like every time I come here I end up in a heat with Albright," Kreke said, glad to win from his fifth starting spot after other drivers had flats or lost driveshafts. "I guess I was one of the survivors." ... Rodney Melvin, disappointed in his poor start in running second to Billy Moyer in a heat race, made a carburetor change on the new Pro Power motor he's been using during the Summernationals. The new carb leaves the engine "flat when you take off," so Melvin reverted to a smaller Braswell model he's accustomed to using. His father and other team members were slaving over the engine on a hot, muggy night. "It's not like you can sit in the trailer and relax. You've gotta be working on 'em all the time.

In a race with just five cars after a first-lap fracas on the backstretch, polesitter Kevin Weaver led all the way for a victory over third-starting Scott James. Seventh-starting Billy James took advantage of the retirees and problems with Jason Feger's car to finish third. Feger was fourth and John Minon Jr. fifth. The red flag appeared on the first lap when Feger got sideways exiting turn two after contact with a drifting Weaver, triggering a wild accident that launched Chuck Proctor into the air and atop a competitors car as the cars scrambled down the backstretch. Wendell Wallace's car was heavily damaged and officials worked to untangle Proctor's machine from Ryan Unzicker's car underneath. The track announcer first said no drivers were injured, but later reported that EMTs were attending to Wallace for a minor hand injury. Unzicker, Wallace and Proctor all pulled off or were towed off without completing a lap.

With the front-row starters struggling, fifth-starting Brent Kreke outdueled fourth-starting Tony Albright for the victory, taking command for good on the seventh of 10 laps. Albright finished second while polesitter Brandon Chappell finished a distant third, just holding off fellow front-row starter Brian Shirley, who pitted early to change a flat tire. Duane Chamberlain's race ended on a flat tire and he rolled across sixth. The first two laps were littered with yellows. The first start was called back when Steven Ashby didn't fire, and then Brandon Sheppard got tangled up with Duane Chamberlain in turn one. Sheppard spun again in turn two on the next start, then stopped again in turn two. Justin Rattliff retired when he lost a driveshaft.

Correction: Updates with other details on Shirley, Rattliff

Polesitter Billy Moyer quickly pulled away Rodney Melvin and cruised to victory. There was never a question about the top two transfers while Scott Riggs fought off Jeff Walston for the third and final transfer spot. Three cautions slowed the first two laps. Michael Kloos spun in turn one on the second lap, collecting Brett Wyatt to draw the first caution of three heats. Donny Walden spun between turns three and four following the next restart, and Wyatt again was collected. Kloos spun again in turn four a lap later.

Polesitter Derek Chandler fought off repeated challenges from fellow front-row starter Randy Korte to grab his first heat victory of the series. Korte was just behind in second while Steve Sheppard Jr. was just behind the top two for the third and final transfer spot. Terry English, in the Burr Motorsports No. 33, was a distant fourth after fighting past Matt Weidner with three laps remaining in the caution-free prelim.

Polesitter Terry Casey outdueled fellow front-row starter Billy Moyer Jr. in a late-race, lead-swapping battle for the victory. Moyer slipped ahead amid traffic on the eighth lap, but Casey regained the point by the white flag and grabb the victory. Fourth-starting Shannon Babb, who slipped back to sixth early, rallied to get the third and final transfer spot, pressure Moyer on the final lap. Series points leader Dennis Erb Jr. battled with Jeep Van Wormer much of the way and ended up fourth.

Billy Moyer of Batesville, Ark., the 1999 UMP DIRTcar Summernationals winner at Clarksville Speedway, set fast time among 44 cars in this year's event at the quarter-mile track near the Kentucky-Tennessee border. Moyer, one of just two drivers to break the 13-second mark, posted a fast lap of 12.743 seconds.

The series is making its 12th stop at Clarksville, where two-time series champion and current points leader Dennis Erb Jr. of Carpentersville, Ill., won last year's event. Other previous winners on hand include two-time winner Shannon Babb of Moweaqua, Ill., Jeep Van Wormer of Pinconning, Mich., Billy Moyer of Batesville, Ark., and Kevin Weaver of Gibson City, Ill. ... Rainouts in three of the last four events has shuffled the series schedule, and series director Sam Driggers reprinted a new schedule to make it clear for drivers. Thursday's rainout at Charleston (Ill.) Speedway will run June 23 (replacing the originally scheduled event in Mount Vernon, Ill.). ... Friday's rainout at Farmer City (Ill.) Raceway is rescheduled for June 29, but because it's on a Monday instead of Saturday, it will pay $6,000 to the winner instead of $10,000. ... Also, Tuesday's rainout at Highland (Ill.) Speedway is rescheduled for July 1. ... In another change, the Waynesfield (Ohio) Motorsports Park event on July 10 is scheduled to pay $7,500 to the winner, the only Friday-Saturday event on the tour paying less than $10,000 to win. ... Also on the Clarksville Speedway grounds is the final night of the North Tennessee State Fair, scrambling the normal parking procedures at the track. The fair was moved from Fairgrounds Park near downtown because of the constuction of a new marina on the Cumberland River.