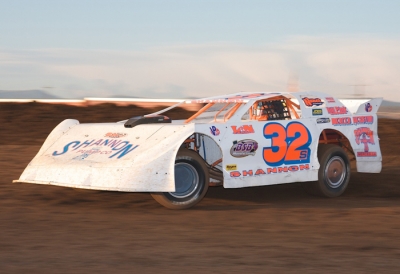 CHICO, Calif. (June 19) — Chris Shannon's winless streak lasted a long while on the Western Allstars DIRTcar Late Model Series. But after grabbing his first career victory June 6 at Marysville (Calif.) Raceway Park, it didn't take for the Merced, Calif., driver long to get his second. | Slideshow

The 42-year-old Shannon set fast time, won his heat, won the dash and led all 30 laps of the feature event from the pole position at Silver Dollar Speedway for a $2,000 triumph on the California-based tour.

Shannon, the reigning series champion, crossed the finish line ahead of 2007 series Mike Johnson of Lompoc, Calif., with Bobby Hogge IV of Salinas, Calif., in third. Zack Forster of Bakersfield, Calif., and modified ace Clay Daly of Watsonville, Calif., rounded out the top five. Rob Mayea of Bend, Ore., was the top finishers among five teams towing from Oregon.

The feature was slowed by a single lap-two caution for debris.

Notes: Shannon is sponsored by Shannon Pump Co. ... Shannon lowered the Late Model track record with his 14.221-second lap. Six other drivers were below the old mark of 15.01 seconds, which stood since 1993. ... Shannon picked up $100 from RaceImages.Net for winning the dash. ... Jeff Decker and Justin Simpson broke in hot laps and scratched for the night. ... The series completes the weekend with a Saturday night race at Antioch (Calif.) Speedway.