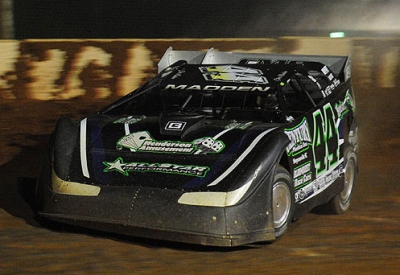 GAFFNEY, S.C. (June 19) — Winning at the track where he's most dominant, Chris Madden of Gray Court, S.C., led all 35 laps of the 11th annual Grassy Smith Memorial at Cherokee Speedway for his second career victory on the Lucas Oil Late Model Dirt Series. The 34-year-old Madden, who started outside the front row, earned $7,000 in becoming the 16th winner in 20 series races.

Fast qualifier Chris Ferguson started alongside Madden at the outset, but Ferguson fell back when he jumped the turn-three cushion on the opening lap. Petey Ivey of Union, S.C., moved into second followed by McDowell, Owens and Cook.

After a lap-two caution for Ricky Weeks of Rutherfordton, N.C., Ivey retired pitside, and on the ensuing restart Ferguson's flat right-front tire triggered a pileup that brought out another yellow. The cars of hometown driver Dennis Franklin and John Blankenship of Williamson, W.Va., suffered the most damage in the accident.

Madden finally got a chance to get rolling on the next start with McDowell and Owens in pursuit. By the halfway point, Madden was building a big lead, but his pursuers cut into that as the leader entered lapped traffic.

The top three went nose-to-tail through the traffic with Madden feeling some pressure before a lap-33 caution appeared when fourth-running Jonathan Davenport of Blairsville, Ga., slowed with a right-rear tire. With clear track on the restart, Madden cruised the final two laps for the victory on the Southern Sizzler Tour.