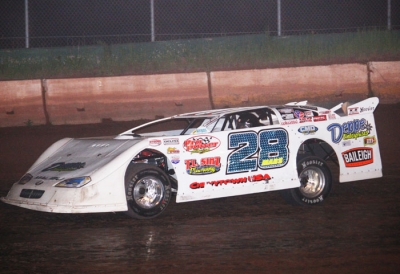 SUPERIOR, Wis. (June 18) — Not even Mother Nature’s cool temperatures, thick fog and sporadic rain could stop Jimmy Mars at Superior Speedway. On a Thursday night that was all but canceled by the weather, the Menomonie, Wis., driver earned $5,000 for leading all 50 laps and capturing his 16th career World Dirt Racing League victory. | Slideshow

Tenth-starting Justin Fegers of Mound, Minn. vaulted himself from fourth to second on the final lap to earn the bridesmaid honors while reigning WDRL champion Chad Simpson of Mount Vernon, Iowa, was third. Red-hot Darrell Nelson of Hermantown, Minn. — a five-time feature winner the previous weekend between his modified and Late Model — was fourth and 12th-starting Jake Redetzke of Eau Claire, Wis. rounded out the top five.

“The track was really good tonight,” Mars said in victory lane. “When I got up to that (lapped) traffic, I didn’t know how well I could work through it. But this car would go anywhere I wanted it to. I have thank my brother Chris and all these guys.”

Pat Doar of New Richmond, Wis. started on the pole, but Mars led from outside the front row to hold the position when Chad Mahder of Marshfield, Wis., slowed the field with just one lap in the record books.

On the restart, Nelson shot past Doar for second and set his sights on Mars. By lap 13, the lead duo reached lapped traffic as Nelson began looking under Mars in the corners. The second and final caution of the event would wave on lap 17 when Andrew McKay of Edina, Minn. slowed in turn four.

With a clear track, Mars was able to put his white No. 28 on cruise control at the front of the pack, pulling away from second-place battle. Although he encountered lapped traffic with 15 laps remaining, Mars would not be denied the win as he crossed the stripe half a straightaway ahead of Fegers, a 2005 and '06 WDRL winner at Superior.

Notes: Mars drives an M-B Customs Chassis with a Pro Power engine and sponsorship from Deppe Enterprises, T.L. Sinz Plumbing, Chevytown USA and Baileigh Industrial. ... All but two of 24 starters were running at the finish. ... Notable drivers who failed to make the feature lineup: Bill Frye, Tim Isenberg, Bryant Goldsmith, Joel Cryderman and Gordie Seegert Jr. ... WDRL competitors plan to spend the weekend at Cedar Lake Speedway in New Richmond, Wis., for a pair of $5,000-to-win events at the Masters.