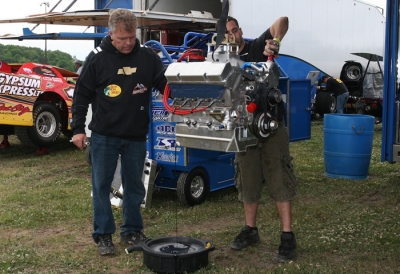 The Josh Richards team works on a powerplant at Ohsweken. (apexonephoto.com)

OHSWEKEN, Ontario (June 18) — A trip to Canada, along with a brand-new car, got Josh Richards back on the winning track with the World of Outlaws Late Model Series. Richards, 21, of Shinnston, W.Va., marched to his second tour triumph of the season Thursday at Ohsweken Speedway, holding off Brady Smith of Solon Springs, Wis., and Darrell Lanigan of Union, Ky., in a nail-biting finish to the Six Nations 50. | Slideshow

A victor on the WoO for the first time since topping the 2009 season opener on Feb. 12 at Volusia Speedway Park in Barberville, Fla., Richards became just the second driver to win more than once on this year's tour. He joined five-time winner Steve Francis of Ashland, Ky., who saw his two-race winning streak end and points lead almost completely evaporate after absorbing a 19th-place finish because he hit the turn-four wall while running fourth on lap 14.

“We've been off a little bit lately with our stuff, but we got back on track with this new car,” said Richards, driving a new Rocket Chassis similar to the Ernie Davis-owned car he's driven to six non-series victories in 2009. “They built it in like three days. It's a twin to the 25 car and it worked great tonight.

“Hopefully this will help us build some momentum up and win some more races. It's a great way to start this trip.”

The $10,600 victory was also Richards's second on Canadian soil, making him the first repeat winner in six WoO events run north of the border since 2007. He won last year's race at Cornwall (Ontario) Motor Speedway.

Richards, who started ninth, made some early moves on the physical, traction-filled 3/8-mile oval to sit second when a flat left-front tire forced Lanigan to relinquish the lead during a lap-five caution period. The former WoO Rookie of the Year then inherited the top spot on lap 15 when 17-year-old Austin Hubbard of Seaford, Del., who had taken control with Lanigan's misfortune, slowed with terminal engine problems on a restart.

The remainder of the distance belonged to Richards, but it was anything but an easy drive to his 14th career WoO victory. He held as much as a straightaway edge midway through the race, but some formidable lapped traffic in the closing circuits allowed Smith to draw within striking distance.

But while Smith, 32, pulled his Bloomquist Race Car up to Richards's rear bumper, he settled for second place in his first-ever visit to Ohsweken. He was 0.429 of a second behind Richards at the checkered flag and less than a hood's length ahead of the hard-charging Lanigan, who erased more than a full straightaway deficit to the leaders over the final 15 laps with his fleet Fusion Energy Rocket car.

Rick Eckert of York, Pa., finished a distant fourth in his Raye Vest Racing entry after starting 10th, and fourth-starter Dan Stone of Thompson, Pa., placed fifth in his Rocket for his best WoO run since scoring an upset win in 2007 at Tri-City Speedway in Franklin, Pa.

Only the top-five finishers were on the lead lap at the finish of the rough-and-tumble event. The race lasted nearly 45 minutes thanks to four caution flags for minor incidents and one red flag for a lap-10 crash in which Shane Clanton of Locust Grove, Ga., was sent spinning out of fourth place in turn four, collecting Clint Smith of Senoia, Ga., and Gregg Satterlee of Rochester Mills, Pa., in the process.

Richards survived the tough track conditions, which were left tacky and fast by overnight rain and damp, overcast day.

“I was pretty much committed to the top,” said Richards, who tied Chub Frank of Bear Lake, Pa., for fourth on the WoO career win list since 2004. “I really couldn't maneuver that well. The last five or six laps I was dead off turn two — my left-rear tire just died — but I was lucky enough to stay up front.”

Smith registered the third second-place finish of his first full WoO season, following runner-up outings on Feb. 14 at Volusia Speedway Park and May 28 at Delaware International Speedway. He remains winless on the '09 tour.

“I honestly couldn't go any faster than I was going,” said Smith, who started eighth. “It was a very physically demanding race. I was shook up like I don't know what.

“I felt like I might have been a little better (in turns one and two) than Josh, but on the other end there were ruts and I just couldn't find a way to get around there and be fast enough to get around him, over him, through him — whatever.”

Lanigan, the defending WoO champion who turned 39 on June 3, once again fell short of his first tour victory of the season after making a gallant rally. He could only shake his head after running out of laps.

“Maybe one more lap,” said Lanigan, who started from the pole position and led laps 1-5. “That's all I might have needed.”

Lanigan did close to within two points of Francis in the WoO points standings. Richards sits third, just six points behind Francis.

Notes: Richards drives a Cornett-powered Rocket Chassis with sponsorship from Seubert Calf Ranches. ... Former WoO champion Tim McCreadie, 35, of Watertown, N.Y., made his long-awaited return to the cockpit from a back injury suffered in a Jan. 15 accident during the Chili Bowl Midget Nationals in Tulsa, Okla. But the winner of the tour's '08 event at Ohsweken experienced a frustrating evening, failing to qualify after being forced pitside by flat tires while holding a transfer spot in both the third heat and second consolation. ... Tony Knowles of Tyrone, Ga., finished a WoO career-best sixth after a consolation victory gave him the 18th starting spot. The 21-year-old pocketed a $500 as the top finishing non-series regular. ... Darrell Lanigan registered his third fast-time honor of the 2009 season, lowering the track's Late Model record with a 14.718-second lap. ... Leading WoO rookie Jordan Bland of Campbellsville, Ky., was seventh for his career-best WoO finish. ... Another rookie, Brent Robinson of Smithfield, Va., also scored a career-best finish in ninth while driving a newly-bodied car that sported a Canadian Maple Leaf on its left-side door. ... Russ King and Brent Rhebergen started from the rear of the field after changing cars; King went to a backup car after the consolation race, and Rhebergen took the green flag in Mike Knight's No. 9K after mechanical trouble in his own machine at the end of the consolation. ... The Canadian stretch of the WoO Great Northern Tour continues Saturday at Autodrome Drummond in Drummondville, Quebec, and Sunday at Cornwall (Ontario) Motor Speedway.