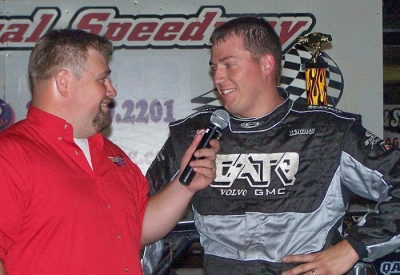 Mars took the lead from Chad Mahder of Marshfield, Wis. on lap nine and led the pack through two mid-race cautions before Mahder began reeling Mars back in. Mahder caught Mars and inched back out front by a nose with just six laps remaining, only to have Mars go back ahead with five to go.

Out of nowhere, a high-flying Simpson rocketed past both Mahder and Mars on the 37th lap to take command. Mars didn't give up, however, going to the high groove when Simpson ducked low and pulling alongside Simpson in lapped traffic as the pair received the white flag.

With Simpson on the bottom and Mars on the top, a pair of lapped cars running side-by-side added to the drama as Simpson held a slight advantage over Mars down the backstretch.

Entering turn three, Mars maintained his high-side momentum while Simpson stayed low, trying to wedge his car between a backmarker and the infield tire barriers. Simpson hopped wheels with the lapped unit, shooting his car into the air as Mars rip-roared around everyone cushion. Desperate to maintain control of his No. 25, Simpson grabbed a handful of steering wheel, smashed the throttle, and beat Mars back to the finish line by less than a nosepiece.

Mars had a hard time being too disappointed with the exciting finish.

“I drove it in there as hard as I could,” he said of his last-ditch effort. “I’m happy to see Chad get the win.”

Mahder started on the pole and led the first eight laps before the fifth-starting Mars took command on lap nine. A lap-14 yellow waved for a slowing Lance Matthees of Winona, Minn. and kept Mars from having to battle lapped traffic. The second and final caution of the event flew on lap 19 when Canadian invader Joel Cryderman of Thunder Bay, Ontario, stopped high in turn four.

Although Mars never led by more than eight lengths after halfway, he seemed to have the race in hand. Mahder, however, found the low groove to his liking and quietly caught the leader with eight laps remaining.

Mahder fell back to third when Simpson made his daring lap-37 pass that catapulted him from third to first. Simpson’s high-side move set the stage for the wild final lap.