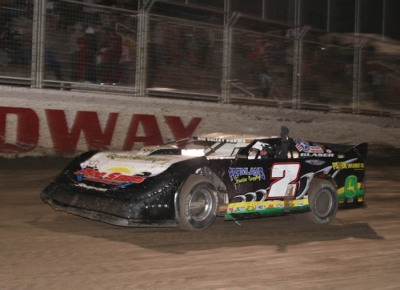 Glaser notched his fifth series victory of the season and 12th overall in the Roger Lorenzini Sr. Memorial and earned $1,750. Rob Mayea made a late charge in the 100-lapper before settling for second with polesitter Roger Lorenzini Jr. in third.

Glaser, a former alpine skier, took the lead from Casey Vitale on the 24th lap and led the rest of the way, but not before Mayea gave him a scare over the final 10 laps.

"Me and Rob are pretty good buddies on and off the track, and when you put your helmet on you want to beat your buddies probably more than anybody else," Glaser said. "I saw the lapped car as we got near the checkered flag, and thought I hope he gets in his way, and not mine, and he did unfortunately for Rob, but lucky for me. ... it was like a pack of dogs on my tail."

Mike Miller, who started 16th, finished fourth while 11th-starting Mark Carrell was fifth. Thirteen of the 19 starters finished with all but two on the lead lap of a race slowed by eight cautions, mostly for spinouts.

Glaser's MasterSbilt Race Car is sponsored by Fisher Implement. ... Hometown driver Dane Smith won the trophy dash over Rob Mayea, Kurt Lorenzini, Paul Guglielmoni and Jeremy Shank. Ignition problems knocked Smith out of the 100 lapper while he was running in the top five. "Boy, it felt good tonight, and we were flying enough to pass Rob Mayea there early, and anytime you pass him, you must be going good," Smith said. ... The event drew 94 Late Models. ... Brian Norton won the F-main ahead of Danny Altom. ... Dan Kingsberry outran Darin Morris in the E-main. .... Joey Tanner passed Rick Wyatt to win the D-main. ... Second-generation racer Cody Sell held off Craig Hansen to nab the C-main while Hansen won the B-main after early race leader Gary Smith crashed into the backstretch chicken wire fence on the final lap.