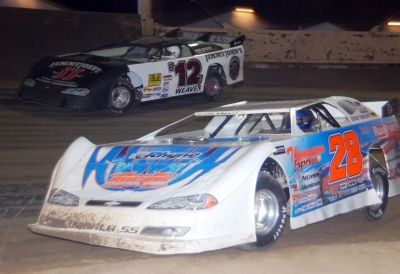 BELLEVILLE, Ill. (June 17) — Don't look now, but Dennis Erb Jr. is starting to pick up momentum in the hunt for his third consecutive UMP DIRTcar Summernationals crown. After falling back to third place in the second half of Wednesday's 40-lapper at tiny Belle-Clair Speedway, the 36-year-old driver from Carpentersville, Ill., refocused and raced into the lead nine laps later to capture the fifth leg of the month-long, 27-race trek. | Complete Summernationals coverage

"It's very good any time you can go out and win a couple of races in a row and just keep your momentum rolling," said Erb, who earned $6,000 for his followup victory to Sunday's triumph at Quad-City Raceway. "Hopefully we can just keep going through this."

Erb went around race-long leader Duane Chamberlain of Richmond, Ind., on the 31st lap and fended off a late challenge from Rodney Melvin of Benton, Ill., to collect his 12th career Summernationals victory on a steamy night at the fifth-mile oval.

"It feels real good to come back here this year," said Erb, who unofficially overtook Kevin Weaver for the series points lead. "We started up there and (Chamberlain) got a jump on me. I knew the racetrack was starting to come in on the outside a little bit. I was just worried about getting passed, there. Rodney got by me, but I got back by him."

Melvin, who started fifth, finished second for his best Summernationals showing of 2009 while Weaver, of Gibson City, Ill., survived a wall-scraping, cushion-banging run to finish third. Chamberlain, who trailed smoke late in the race after breaking a suspension link, was fourth and Scott James of Lawrenceburg, Ind., rounded out the top five.

"With about 10 to go, the car got real loose, and I thought my tires went away because I went softer than everybody," Chamberlain said. "But once I got back (to the pits) and the rear end is cocked on the car and I've got a bar broke completely off of it — one of the main bars that makes the suspension work — so that's definitely what happened."

Weaver ran the high side most of the way but ended up making a few late passes down low. "I thought I could get 'er done up there. I climbed the wall, and I thought, 'Well, there ain't no sense in quitting now,' " Weaver said. "You hit that berm a couple of times wrong, and man, it costs you. We fell back to fifth."

Polesitter Randy Korte of Highland, Ill., finished 10th, but he never got a chance to run up front. He had a flat left-rear tire before a lap was even complete and barely made it back onto the track for the green flag.

Korte's departure gave Chamberlain the pole, and Chamberlain took advantage by hugging the inside wall and edging away from the competition with the help of his softer tire compound. Behind him, Erb, Melvin and Weaver were duking it out, swapping positions and grooves while trying to keep up with Chamberlain.

Chamberlain survived a lap-21 scare for a caution-causing tangle with the slowing car of Shannon Babb, who ended up with a flat tire. Chamberlain reinstated to the lead despite stopping on the track and led Erb back to the green flag.

But Melvin got rolling on the high side and was up to second when a lap-23 caution appeared for Frank Heckenast Jr., who got into the turn-one wall. Erb stuck with his low groove and slipped back past Melvin, then began his mid-groove assault on Chamberlain. Erb made the winning exiting turn two on the 31st lap, and Melvin duplicated the maneuver moments later. Melvin stayed with Erb the rest of the way, but never could mount a serious challenge on the winner.

Notes: Erb's Rayburn Race Car has a Rhyne Competition Engine and sponsorship from Thomas Express, Mack McBride and PRC. ... Four yellow flags slowed the action, the first for an aborted start and the second on lap five when Brian Beilong spun in turn four. The Chamberlain-Babb collision triggered the lap-21 yellow and Heckenast's foray in turn one drew the final yellow two laps later. ... Next up for the UMP DIRTcar Summernationals regulars is a Thursday event at Charleston (Ill.) Speedway. The only series event at Charleston was in 2002, the second-to-last series win ever by Hall of Famer Bob Pierce.

Ryan Unzicker led all the way from outside the front row to transfer to the feature event along with Shannon Babb and Derek Chandler, who fought off an early challenge from Kyle Logue. Babb stayed with Unzicker early before stumbling exiting turn four just before the halfway point, but Babb recovered and held on to second in the caution-free event. Frankie Martin was the race's only dropout, pulling in after a tangle with Jason Feger.

Mike Hammerle won the first C-Main to transfer to the B-Main along with second-place finisher Kevin Cole. Matt Weidner won the second C-Main and transferred along with Clay Baumann.

In the redraw among heat winners, Randy Korte will start on the pole with Dennis Erb Jr. to his outside. Duane Chamberlain and Kevin Weaver are in the second row with Rodney Melvin inside the third row. Coming up is two C-Mains (transferring two cars apiece to the B-Main) and the B-Main, sending three cars to the feature.

Polesitter Steve Sheppard Jr. took the lead from the outset and went to the high groove, but the low groove he left for Duane Chamberlain helped Chamberlain take command before the halfway point. Chamberlain faced a stiff high-side challenge from third-starting Brian Beilong midway through the race, but soon everyone was on the bottom with Chamberlain leading Sheppard and Beilong to the checkered flag. Frankie Martin was fourth, but never in serious contention for a transfer spot.

In a race featuring a three-wide battle for the lead on the frontstretch midway through the race, Dennis Erb Jr. fought off serioius mid-race challenges to win from outside the front row. Polesitter Terry Casey, who fell to second early but nose back into contention, settled for second with Brent Kreke getting the third and final transfer spot. Kevin Cole raced from third into a tight battle for the lead, but he spun on the backstretch while trying to overtake Erb on the seventh lap. Erb (high), Casey (middle) and Cole (inside) crossed the start-finish line virtually three abreast midway through the race.

Third-starting Rodney Melvin became the first non-front-row starter to win a heat, working the low groove to take second from Jeep Van Wormer, then take the lead from high-running Frank Heckenast Jr. Heckenast and Van Wormer held on to get the other two transfer spots while Kyle Logue rebounded from a first-lap mishap to finish fourth. The initial start was called back when Jim Moon and Logue tangled off turn four, leaving Logue spun on the backstretch. A lap-eight caution appeared for a slow pileup including Rusty Schlenk, Jim Moon, Jim Gibson Jr. and Clay Baumann.

Polesitter Randy Korte fell behind fellow front-row starter Scott James early, but Korte fought past the high-running James and cruised to victory. James was second followed by Wes Steidinger, who got the third and final transfer spot in the caution-free prelim. Ryan Unzicker, runner-up in the previous two Summernationals events, was fourth and goes to the B-Main.

Outside front-row starter Kevin Weaver outdueled polesitter Mark Voigt in a side-by-side duel the first few laps, then pulled away to win by more than a half-straightaway. Voigt finished second alone while Ed Dixon got the third and final transfer spot ahead of Shannon Babb, who started eighth.

On a night at a tiny track with a big purse and big car count, Mark Voigt of Marine, Ill., topped a track-record 47 qualifiers at the fifth leg of the UMP DIRTcar Summernationals. Voigt turned an 11.467-second lap at the fifth-mile oval near St. Louis.

The top three finishers from each of five heat races will transfer to the 21-car main event, a 40-lapper paying $6,000 to the winner. Two drivers apiece from two C-Mains advance to a B-Main, which sends three drivers to the main. Three provisional starters round out the field.

The series comes off a two-day break after a scheduled day off on Monday and Tuesday's rainout at Highland (Ill.) Speedway, which was rescheduled for July 1. ... At Belle-Claire, Justin Rattliff nearly lost control in turn four during his qualifying lap, costing him a few seconds. ... The next qualifier, Jason McBride, lost time when he got into the wall between turns one and two. ... Rusty Schlenk also got too high in turn four. ... Rodney Melvin's track record of 11.260 seconds stood.