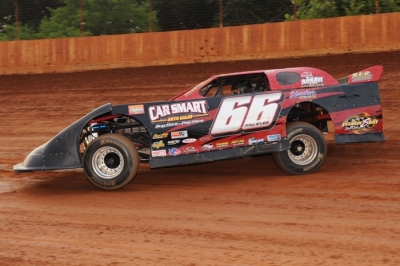 The 23-year-old Knowles, part of a famed Atlanta, Ga.-area dirt racing family, fought off challenges from Hall of Famer Scott Bloomquist for a $7,000 victory in the first Lucas Oil Late Model Dirt Series event at the third-mile oval. The victory on the Lucas Oil Summer Sizzler Tour triggered a massive celebration with family and friends on the frontstretch.

"Man, to hold off Scott, I don't know what to say. I just held my line and kept him behind me," said Knowles, the son of former driver Wade Knowles. "I knew he was there. My dad kept giving me signals there in traffic. I was trying to slow up a little so I wouldn't overdrive the car."

Bloomquist, of Mooresburg, Tenn., settled for second with Dale McDowell of Rossville, Ga., in third. Outside front-row starter Jamie Perry of Ringgold, Ga., got his best series finish in fourth and fast qualifier Don O'Neal of Martinsville, Ind., rounded out the top five.

After a lap-seven yellow for Michael Walker, Bloomquist plotted his moves on Knowles, who eventually faced lapped traffic at the third-mile oval with concrete walls inside and out.

The race's final yellow appeared on lap 23 for Todd Morrow, giving Knowles a clear track for the final 17 laps.

Running the high side, Knowles kept Bloomquist at bay, but Bloomquist repeatedly tried to get underneath the leader exiting turn four. Knowles endured a final scare in negotiating a lapped car in the closing laps, but he successfully completed the victory, becoming the 14th winner on the Lucas Oil circuit in 2009.

Notes: Knowles drives a MasterSbilt Race Car with a Race Engine Design motor and sponsorship from Car Smart Auto Sales, Cleveland Speedway Driving School, VP Racing Fuels and Cruise with the Champions. ... His car is owned by Cleveland Speedway promoter Monty Morrow, who congratulated his driver in victory lane with a hug. ... The victory is perhaps the biggest of Knowles's career, but he earned a richer $10,000 payday in 2006 with a Crate Late Model victory at East Alabama Motor Speedway in Phenix City. ... Fast qualifier Don O'Neal picked up a $500 bonus from ATC Roofing and an extra $200 from Murphy Glass and Mirror. ... Billy Ogle Jr. of Knoxville, Tenn., made a 19th-to-ninth run to earn the PBM-Erson Cams Hard Charger honors. ... Among drivers failing to make the feature: Brian Hickman, Kayne Hickman, Rick Rogers, Johnny Chastain and Steve Smith. ... The Summer Sizzler Tour continues for the Lucas Oil drivers with a $10,000-to-win event Thursday at Swainsboro (Ga.) Raceway, a makeup of an April 4 rainout.