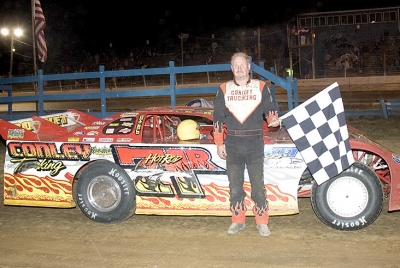 UNION, Ky. (Sept. 29) — Rod Conley of Wheelersburg, Ohio, closed out the season at Florence Speedway with his first career victory at the half-mile oval. When a late-season O'Reilly Battle of the Bluegrass event was removed from the schedule, the track replaced it by putting a $5,000 winner's purse on its final weekly event of the season. | Slideshow

Jesse Lay got out to the early lead, but mechanical problems struck after six laps and Conley inherited the lead. But track champion Audie McWilliams was suddenly in the mix and made a high-side pass for the lead on lap 13. Conley answered that move seven laps later to regain the point and lead the remainder of the 50-lapper. Chris Combs advanced from his fourth starting spot to finish second while 18th-starting Mike Jewell was third, one position better than McWilliams. — Ron Jerger