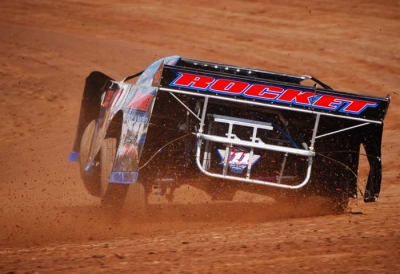 Rob Blair gets up to speed before his feature victory. (stivasonphotos.com)

FRANKLIN, Pa. (June 14) — Rob Blair of Titusville, Pa., overtook series points leader Boom Briggs on the fourth lap at Tri-City Speedway and led the remainder of the Cranberry Pennzoil 40 for his first O'Reilly All Star Series victory of the season. | Slideshow

Blair dominated most of the feature event for a $5,000 payday while David Scott of Garland, Pa., subbing in the No. 21 for an injured Bill Henry, finished second. Chub Frank of Bear Lake, Pa., was third followed by Briggs and Dave Hess Jr. of Waterford, Pa., who also won the day's modified feature.

Ron Davies of Warren, Pa., and Briggs led the field to green with Briggs commanding the first three laps. But Blair took over before a lap-five caution, then stayed in control while Briggs, Davies, Scott and Frank dueled behind him.

The second and final caution appeared on the 16th lap when Dutch Davies and Rod Conley made contact on the frontstretch. Conley spun just past the flagstand and returned to the race while Davies went pitside with front-end damage.

Blair, a former track champion who also won at Tri-City on May 3 in Northern Tier United Late Model Series action, rolled the final 24 laps for the victory.

Notes: Blair's Rocket Chassis is sponsored by Specialty Products, Bossard Auto Parts, Maloney Tool & Mold and Armstrong Lumber. ... Without a full complement of cars, Crate Late Models filled out the Super Late Model field. ... Bobby Powell overtook Bryan Salisbury on the sixth lap en route to a victory in the event's Fastrak-sanctioned Crate Late Model feature. ... Midway Speedway in Crooksville, Ohio, pulled its July 2 Jim Dunn Memorial off the series schedule. ... Next up for the O'Reilly All Stars is a June 20 visit to Tyler County Speedway in Middlebourne, W.Va., the first series trip to the Mountaineer State.