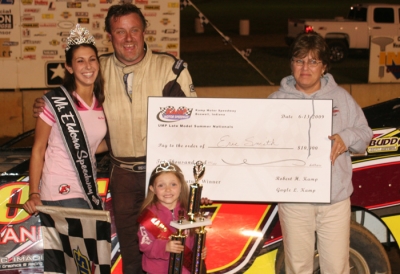 BOSWELL, Ind. (June 13) — During a lap-25 caution at Kamp Motor Speedway, polesitter Eric Smith of Bloomington, Ill., felt the one thing he didn't want to feel while battling a racetrack with an unforgiving cushion on a long, rain-delayed night: A spongy brake pedal. | Complete Summernationals coverage

"Those last 15 laps, I just had to kind of go into the corner and use the gas to get the car to turn. I was getting tired and I just kept overdriving the corner," Smith said. "I kept hitting that cushion. I screwed up quite a bit there at the end. I was just trying to hang on."

Smith's miscues allowed Ryan Unzicker of El Paso, Ill. — another ARCA refugee — to close a straightaway gap to nothing with less than two laps remaining, but Smith edged away on the white-flag lap to grab a 40-lap victory worth $10,000, the richest of his career on dirt or asphalt.

Girlfriend Heidi, 9-year-old daughter Chassidy, crew chief Ryan Courtney and others greeted an excited Smith in victory lane at the third Summernationals event in the wee hours of the morning at the 3/8-mile oval, which was soaked by afternoon rain that required extensive surface preparation and caused some high-profile drivers to load their equipment rather than race.

For Courtney and Smith, the victory was redemption from a near-miss on the Summernationals circuit last year at Lincoln (Ill.) Speedway, when a broken axle knocked Smith out of the lead.

"Ever since then we felt like we had one owed to us," said the 30-year-old Courtney. "Last year we sat on the pole for three (Summernationals races) and kind of struggled. We started on the pole here and struggled, ended up seventh. We kind of had a little goal to come back and get one of these. I think we kind of felt like we put ourselves in a good position a lot to win one, and just had bad luck or bad cars or bad circumstances, but I felt like we had one coming to us."

Smith's win came in a big way, but not without the excitement of running the race's late stages without brakes on an already-tricky track.

"You just had to be real careful not to overdrive the corner. I was actually getting a little tight there, so I kept having to slide in, and that was causing me to bang off that cushion, kind of spinning my front end back around. I was just trying to hold on for all it was worth," said Smith, who didn't realize Unzicker was right on him in the closing laps. "Here, it's really hard to tell if somebody's right there. You're lapping cars ... I just assumed there was somebody there the whole time. I tried to run as hard as I could every lap."

Unzicker, who started seventh and took second from Terry Casey of New London, Wis., on the 10th lap, saw Smith was vulnerable in the race's waning moments.

On the final lap, "we were expecting Eric to go to the top side, so we were kind of set up to go to the bottom to try to do a slide job," Unzicker said. "But he surprised me and went to the bottom. I tried to go to the top and just had too much momentum and jumped the cushion there a little bit. He kind of pulled away and that's all she wrote. I'm happy for second. Congratulations to Eric, that's an awesome win."

Casey was further back in third while third-starting Frank Heckenast of Orland Park, Ill., rallied after an early pit stop to finish fourth. Steve Sheppard Jr. of New Berlin, Ill., rallied from 13th to finish fifth in a race where two top-five runners fell from contention.

Sheppard's teen-aged son, Brandon, led the early laps before dropping to third and climbing the wall between turns one and two on the eighth laps. Ninth-starting Jason McBride of Carbondale, Ill., ran as high as third before fading to 10th.

Skipping the race altogether was two-time and reigning Summernationals champion Dennis Erb Jr. of Carpentersville, Ill., current points leader Billy Moyer of Batesville, Ark., two-time Dirt Track World Champion Shannon Babb of Moweaqua, Ill., and first-leg Summernationals winner Jeep Van Wormer of Pinconning, Mich. About a dozen drivers bowed out of competition, saying the surface conditions — the inner and outer walls were ringed with mud that never dried from the rainstorm — were unsafe and would be too hard on equipment.

"I don't blame them guys. They race for a living every night," Smith said. "If I was in their situation where I was running every night, I'd probably do the same thing. But I really had nothing to lose to stay."

Unzicker acknowledged that plenty of cars were punished by the rugged cushion during the 40-lapper, but he was happy to stay and race. "We don't want to tear (equipment) up, either," he said, "but a local guy, when he gets his shot at $10,000, he wants to race."

Polesitter Frank Heckenast Jr. led all the way for the victory, but his straightaway lead over Steve Dimmick was erased in the final two laps when he had trouble lapping Russ Adams. Dimmick cut the margin down to just a few lengths at the finish while Kevin Weaver was further back in third. Jason Feger was a distant fourth for the final transfer spot.

Fast qualifier Brandon Sheppard, taking the lead when Guy Volk slipped up midway through the race, won the third heat over Ryan Unzicker. Volk ended up third while Justin Rattliff got the fourth and final transfer spot. Only five of 11 cars in the group ran.

Outside front-row starter Eric Smith led all the way in the caution-free prelim, surviving a late scramble with lapped traffic to pull away from Donny Walden and Duane Chamberlain. Dick Potts, the 70-year-old Hall of Famer, held off Joe Janowski for the fourth and final transfer spot.

Polesitter Terry Casey led all the way in the first eight-lap heat to outdistance five competitors. Brent Kreke finished a half-straightaway behind in second while Jason McBride was third. Steve Sheppard was more than a half-lap behind but got the fourth and final transfer spot.

Brandon Sheppard of New Berlin, Ill., was the fastest of about 30 qualifiers at Saturday's third leg of the UMP DIRTcar Summernationals at Kamp Motor Speedway on night when many high-profile drivers protested the decision to race on a wet racing surface soaked by afternoon rains.

The teen-aged Sheppard posted a lap of 14.233 seconds on the 3/8-mile oval and will start on the pole of the third heat. While about 30 drivers qualified, more than a dozen more passed on their qualifying laps, arguing track conditions wouldn't be safe and would damage racing equipment Among drivers loading up were former series champion Billy Moyer, Will Vaught, Brian Shirley and Randy Korte with others skipping time trials even though they hadn't loaded up, including two-time and defending Summernationals champion Dennis Erb Jr.

Moyer and others said they didn't want to risk damaging their cars on a hooked-up track with heavy mud inside and out. "We all came out here to race," Moyer said. "I just want to be sensible about it."

The event was all but canceled by officials — though not announced to fans — when modified driver Rusty Griffaw put his car where his mouth is at Kamp Motor Speedway and pulled onto the track surface declared unraceable.

Griffaw's 8:28 p.m. appearance drew cheers from fans waiting for a program delayed more than two and a half hours, and soon more than 50 drivers in all three divisions — including about half the 44 Late Models — joined him to help pack a track soaked by heavy afternoon showers. They weren't called to the track by officials.

UMP DIRTcar series director Sam Driggers and track co-owner Bob Kamp were discussing the possibility of a June 29 rain date when Griffaw, who had complained vociferously that the track was raceable, pulled onto the track on his own accord.

With Griffaw eventually joined by several other drivers and eventually more than 50 cars — Jason Feger of Bloomington, Ill., was the first Late Model driver out after saying he wanted to show fans the drivers would make their best attempt to race — the track shaped up, although the extreme inside and outside of the track were still sloppy, especially inside turns one and two.

Hot laps were originally scheduled for 6 p.m., but showers lasting about a half-hour a few hours earlier delayed the action.ï¿½The track's modified and street stock divisions are also scheduled to be in action.

Correction: Fixes report from track worker that Brian Birkhofer arrived and departed earlier in the afternoon.