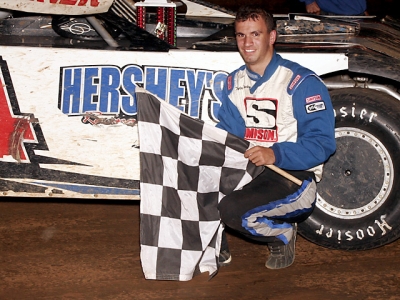 NEWBERRYTOWN, Pa. (Sept. 29) — Tyler Hershey of Mercersburg, earned a career-high $5,000 by leading the final 12 laps of the second annual Susquehanna Showdown. Hershey, who turns 27 on Oct. 4, was best among 52 Limited Late Model entrants in the unsanctioned event at Susquehanna Speedway Park. | Slideshow

Gene Knaub of Dover, Pa., who led the first 38 laps, settled for second with Jerry Bard, Kyle Lear and Chuck Yingling rounding out the top five at the 4/10-mile oval in southcentral Pennsylvania.

Scott Palmer and Gene Knaub brought the 25-car field to the green flag and Knaub jumped out to the early lead with Richard Walls and Hershey pursuing early. After six cautions in the first 20 laps, a fuel stop was called to allow drivers to finish without pit stops, and Hershey was in second for the restart.

Following the red flag, Knaub continued to lead over Hershey and Walls as they aggressively pursued the leader. A few more caution flags allowed Hershey to test Knaub, but he was not able to overtake him.

Further back, 2007 track champion Carl Billet Jr. moved from his provisional starting spot on the tail of the field to fourth by the 32nd lap. However, just as Billet was ready to take third from Lear, his hood flew up in the air, blocking his vision. The yellow flag flew and Billet returned to the pits to have his hood removed, but he wouldn't have time to rally again.

When racing resumed, Knaub and Hershey continued their side-by-side battle. Before the race, Knaub chose a softer compound for the right rear and Hershey opted for the harder. On lap 38, Hershey was finally able to take the lead from Knaub as Knaub’s tire began to finally show signs of wear.

Hershey crossed the finish line 10 lengths ahead of Knaub while Bard won the three-way battle for third in the closing laps.

Hershey's Rocket Chassis is powered by a Hershey Racing Engine and sponsored by Rustique Log Homes, JWP Environmental, B&J Liberty, Main Street Pizza, Lawnmasters Inc. and C/T Machining Solutions. ... The event was sponsored by Hershey won the Limited Late Model championship at Williams Grove Speedway in Mechanicsburg, Pa. ... Following the race, Hershey had a chance at a $25,000 bonus. He had to draw the correct two envelopes from 20 envelopes to collect the bonus, but he didn't get it. ... Hershey, Gene Knaub, Tyler Armstrong, Scott Richwine and Richard Walls won heat races. Mike Shoemaker won the C-main and Paul Crowl won the B-main. ... Dave Sokolowski advanced through the C and B to make the feature. In the main event, he started 24th and rallied to finish sixth to earn hard charger honors. ... Among drivers failing to make the feature: Coleby Frye, Les Hare, Jake Lettich, Bud Witmer, Dave Shulski and Gary Potts. ... Susquehanna Speedway Park wraps up its season Oct. 6 with an enduro, the third annual Pumpkin 200. The Great American School Buses, Classic Cars, Penn Mar Vintage Cars and Mini Vans will take to the track before the enduro.