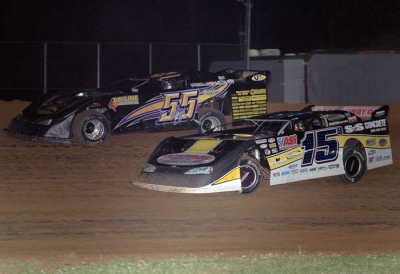 BROWNSTOWN, Ind. (June 11) — Hitting your marks while running a qualifying lap is one thing. But maintaining your fastest groove with three aggressive challengers nipping at your rear deck is another thing altogether.

That's the position Jeep Van Wormer found himself in midway through Thursday's UMP DIRTcar Summernationals opener at Brownstown Speedway, the first of 27 races over the next 31 nights. Van Wormer felt heat from Brian Birkhofer, Dennis Erb Jr. and Darrell Lanigan at different points in the 40-lap main event, occasionally all at the same time, and he knew he couldn't make a mistake on the tricky straightaway berms at Brownstown that turn into bankings in the corners. | Complete Summernationals coverage

"I'm like, 'If I spin this thing out, I'm not allowed to bring this car back to the trailer. (Crew chief) Joe (Drake) will kick my butt.' So I just concentrated and kept hitting my marks," said the 34-year-old driver from Pinconning, Mich. "I saw Brian the one time, and I saw Dennis the other time, and I was like, 'Just hold out, hold out.' "

Nearly swallowed up by his challengers with 15 laps remaining, the third-starting Van Wormer rebounded from Erb's single-lap lead on the 28th circuit and edged back ahead, turning back Birkhofer's final challenge for a $6,000 payday and his ninth career Summernationals victory.

Van Wormer, fourth in series points last season but undecided about chasing this year's tour, second-guessed his choice of soft tires (Hoosier LM20s) initially, but the rubber that helped him grab the lead from Birkhofer following a lap-three restart was good enough at the end.

"We put on 20s, and honestly, once we got out there and saw how black the track was, I didn't think by any stretch of the imagination it would've held on for 40 laps," said Van Wormer, who finished second at last year's Brownstown event after losing the lead with three laps remaining. "At first when I got the lead I was doing it in the bottom, then I went back up top and just tried (to maintain) momentum and not spin my tires. It held out. I didn't think it was going to.

"Those guys would show me a nose here and there, and I just got back up on the wheel and concentrated on hitting my marks, and it lasted."

Birkhofer, of Muscatine, Iowa, crossed the finish line just a few lengths behind Van Wormer after falling back to fourth on lap 25, but his second-place run was scuttled at the scales when he weighed in five pounds below the 2,300-pound minimum. That moved the ninth-starting Erb of Carpentersville, Ill. — the two-time and defending series champion — up to second with Lanigan, of Union, Ky., third. Kevin Weaver of Gibson City, Ill., who started 14th, and Randy Korte of Highland, Ill., who started 12th, both used the low groove in rounding out the top five at the quarter-mile oval in southern Indiana.

As it turned out, Birkhofer's challenges were academic because of his disqualification, but he knew overtaking Van Wormer was a tall order.

"I didn't think I'd have enough to clear him," Birkhofer said. "We fought with Erb and Lanigan so much there, I was kind of happy to get back to second, and I thought, 'If Jeep went in there and got a little hot and got his right rear over the cushion, I can get him.' But it would've really been bad to have been five pounds light and won the race."

Birkhofer wasn't the only front-row starter who had troubles. Polesitter Rodney Melvin was knocked out of contention on a lap-two restart when his rear bumper was clipped by Van Wormer entering turn one, sending Melvin's No. 27 spinning 180 degrees; he was sent to the tail for stopping on the track.

The race was slowed by four other cautions, none for serious incidents. Greg Johnson and Kevin Cole tangled in turn one on the second lap and Duane Chamberlain spun near the same spot on the third lap. Steve Sheppard Jr. slowed on the top side of turn four on lap five. Scott James spun off turn four on the 15th lap.

Notes: Van Wormer's Rocket Chassis has a Cornett powerplant and sponsorship from Globe Technologies, Bayline Fire Protection and Allstar Performance. ... Brian Birkhofer led the first three laps, but Van Wormer was out front for the lap-five restart. ... Dennis Erb Jr. appeared to cross the line in a dead heat with Van Wormer on lap 26 and officially led lap 28 before Van Wormer stretched his margin to five lengths on lap 30. ... Next up on the series is a $10,000-to-win event at Kankakee County (Ill.) Speedway on Friday, the second leg of the 27-race grind.

Polesitter Jason Feger led flag-to-flag while two other charging drivers earned the other two transfer spots. Greg Johnson started seventh and quickly moved into the second spot, while sixth-row starter Justin Rattliff — fresh off winning the C-Main — rallied in the high groove to get the third and final transfer spot from Steve Sheppard Jr. in the closing laps. Sheppard will still start the feature with a provisional starting spot.

The track began an intermission about 9:15 p.m. to rework the track surface. The track has a reputation as dry-slick, but the week's rain and evening's sprinkles have given it more traction than usual ... It hasn't rained since the second heat, but there are looming dark clouds off the turn-four side of the track. Radar shows a line of precipation just north of Brownstown and tracking east. ... The Late Model B-Main is next, followed by the super stock consolation race and then the 40-lap Late Model feature. ... Wes Steidinger will take a UMP points provisional and start the No. 74 of teammate Russ Adams after breaking an engine in his No. J1. ... Mark Voigt loaded up after breaking a just-freshened motor in his No. 30 and hopes to get it repaired before heading to Kankakee. ... The night's racing is sponsored by Jones Core.

Justin Rattliff won the C-Main to transfer to the B-Main along with Joe Janowski, Jordan Bland and Jason McBride.

Polesitter Rodney Melvin turned back challenges on a lap-four restart and pulled away for a victory. Third-starting Kevin Cole couldn't quite stay in touch in finishing second while Randy Korte finished third. Duane Chamberlain, who started outside the front row and battled door-to-door with Melvin early, got the fourth and final transfer spot. Jason Jameson spun high in turn three to draw a lap-four caution, the race's lone slowdown. Joey Jones, who finished last, saw smoke come from his car in the final moments.

Polesitter Brian Birkhofer outdueled Brian Shirley in the early laps and eased away to victory in the third heat. Shirley settled for second with seventh-starting Steve Barnett moving into third in the final laps. Donny Walden, who started sixth, got the fourth and final transfer spot. A first-lap caution appeared when Tim Prince and Russ Adams got together near the back of the pack in turn two. Wes Steidinger, who wrestled the second spot from Brian Shirley midway through the race, saw his car go up in smoke exiting turn two on the seventh lap. Sprinkles through the first two heats have subsided.

Fourth-starting Jeep Van Wormer came out on top of a wild battle among the top four in the first two laps, then edged away for a caution-free victory. Outside front-row starter Scott James got the second spot ahead of Darrell Lanigan and polesitter of Kevin Weaver, the last of four transferring cars. Steve Sheppard Jr. was never in the mix in finishing fifth.

In a dazzling three-car battle over the final three laps, Billy Moyer edged Terry Casey and Dennis Erb Jr., for the victory. Moyer stalked Erb most of the race before sliding up in front of him into turn three, just as Casey was putting pressure on Moyer in the inside groove. Casey nearly pulled alongside Moyer before settling for second late while Erb hung tough in third. Shannon Babb as nearly a straightaway behind in the fourth and final transfer spot. Polesitter Chad Stapleton faded to finish fifth.

Chad Stapleton of Edinburgh, Ind., was the surprising fast qualifier among more than 40 drivers at the season-opening UMP DIRTcar Summernationals event at Brownstown Speedway. Stapleton turned a lap of 14.039 seconds on the quarter-mile oval in southern Indiana.

Threatening rain in the area briefly delayed qualifying midway through the session, but action continued after a 15-minute delay for the brief sprinkles.

The top four finishers in each of the four heats will transfer to the 21-car main event with the heat winners drawing for starting spots in the first two rows.

Rain showers hit earlier in the day and were threatening throughout the air in the early evening. ... Dustin Linville of Lancaster, Ky., peeled his left-rear tire off the rim during his time-trial lap. ... Jeep Van Wormer of Pinconning, Mich., slipped over the turn-three banking on his first lap, but got a better time when officials granted him a second lap; his first lap came just as sprinkling rain began about 6:40 p.m.