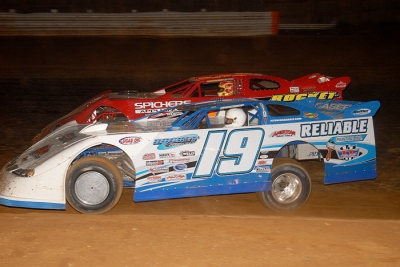 WINCHESTER, Va. (Sept. 28-29) — Steve Casebolt of Richmond, Ind., took the lead from Nathan Durboraw just before the lap-56 fuel stop and led the rest of main event for a $10,000 payday at Winchester Speedway. The 100-lap feature completed the final portion of the traditional Winchester 200 as Casebolt won in the region of his car owner Dale Beitler of West Friendsville, Md. | Slideshow

Beautiful weather drew a big crowd to Winchester to watch Feathers and Durboraw start on the front row. After an early caution involving Stuhler, Wayne Walls Jr. and Bubby Dillman, Durboraw and Feathers began a lead-swapping duel through the first 13 laps.

Chad McClellan brought out a lap-13 caution and the field was reset with the eighth-starting Casebolt already up to the fifth spot.

Durboraw took control as the race rolled on with Feathers, DeHaven, Casebolt and Devin Friese in pursuit at the lap-20 mark. Allen Brannon retired on lap 23.

A lengthy stretch of green-flag racing began on the restart. While Durboraw held the top spot, Feathers and DeHaven were in a tight battle for second while Casebolt stalked both of them. By lap 44, Casebolt had worked his way into the second spot and began his pursuit of Durboraw.

The pair started a side-by-side duel on lap 49 and Casebolt went ahead on lap 53. Durboraw ended up retiring on the lap-56 fuel stop as several cars dropped out of action or took the opportunity to pit.

Casebolt eventually led the field back into action with DeHaven, Feathers, Bare and Friese giving chase. Jim Bernheisel, who started 15th, was making his way toward the front and took the fifth spot from Friese on lap 65, three laps after the final caution of the race appeared for Jonathan DeHaven and Tony Crim.

Only 15 cars remained as Casebolt and his challengers began the final 30-lap stretch. Casebolt stayed in control the rest of the way while Stuhler, recovering from going to the tail for an early caution, rallied back to fifth.