Back from injury, T-Mac aims to race again soon 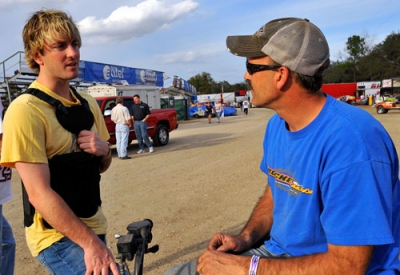 Tim McCreadie is ready to get back behind the wheel of a Dirt Late Model. Barring any setbacks in his recovery from a back injury, the sensational driver from Watertown, N.Y., plans to make his long-awaited return to competition in the World of Outlaws Late Model Series Great Northern Tour opener June 18, at Ohsweken (Ontario) Speedway.

McCreadie, 35, has been sidelined from pursuing his full-time occupation since Jan. 15 when a wild, flipping crash during qualifying for the Chili Bowl Midget Nationals in Tulsa, Okla., left him with a fractured T-3 vertebra and floating bone fragments in his back.

“The last five months have definitely been frustrating,” said McCreadie, who has spent the majority of his recuperation time at the Watertown home of his father, legendary DIRTcar big-block Modified driver "Barefoot" Bob McCreadie. “When you're used to always being busy and around racing, it's hard to be stuck in a house just waiting to heal up. I can't wait to get back out there and do what I love to do.”

McCreadie traveled to Indianapolis the first week in May for a checkup with Dr. Terry Trammell, the renowned orthopedic surgeon who has helped many injured drivers over the years. A clean bill of health from Trammell allowed the 2006 WoO LMS champion to finally shed the wraparound back brace he had been wearing since the accident, with his return to racing hinging upon how quickly he could whip himself back into satisfactory physical shape to wrestle his 800-horsepower Sweeteners Plus No. 39.

After his long period of inactivity, McCreadie has been slowly rounding his body into racing trim. He's been heading off to the gym each day to follow an exercise program provided to him by a sports trainer and has experienced plenty of soreness, especially in his back muscles, but he's hopeful that the rehabilitation pain will soon fade away.

“I had planned on racing again at the end of May (starting with a WoO LMS event at Delaware International Speedway), but I just wasn't ready yet,” said McCreadie. “It's frustrating when you're still sore and feel like you're not getting better, but I'm getting there. It just takes time.

“I'm shooting to come back at Ohsweken and then run the (Great) Northern Tour races,” continued the driver known as T-Mac, who hopes to turn some test laps at a local track before heading across the border on June 18. “All the races are at tracks we're pretty familiar with and they're all close to home, and I really want to get some races in so I'll feel like I'm ready to run for some big money when we go to Lernerville (Speedway in Sarver, Pa.) for the ($30,000-to-win) Firecracker 100 (on June 26-27).”

The 3/8-mile Ohsweken oval is the only track on the eight-race Great Northern Tour that McCreadie has run just once in his career, but his single appearance there resulted in a victory. He captured last year's inaugural Six Nations 50 at Ohsweken, which sits about 65 miles southwest of Toronto and 75 miles west of Niagara Falls.

One of the country's hottest dirt Late Model drivers at the end of the 2008 season, McCreadie is confident that he'll be able to regain his winning form following his long layoff.

“You always have your ability,” said McCreadie, who owns 11 career WoO victories. “The only issue I see is sharpness. You don't get sharp sitting around for months on end, but I'll look at it like I'm starting the season off in Florida after not racing for the winter.

“I don't think we'll be missing anything with our cars. I've been talking to some people about stuff that's working on their cars and it's the same stuff that we were doing at the end of last year.”

McCreadie, who has attended just a handful of upstate New York big-block modified events as a spectator since returning from his February trip south to watch the annual Dirt Late Model shows in Florida, is anxious to put the most disheartening period of his career behind him. But in the same vein, he can't help but acknowledge the outpouring of support he's received since his crash from the racing community and beyond.

“So many people have helped me out,” said McCreadie. “There were two benefits for me (to raise money for his medical bills) that helped me a lot, and I've just been amazed by how many people have been interested in how I'm doing.

“I haven't really been in Watertown much for the past four years, but I've had people I don't even know come up to me on the street and ask how I was doing.”

In fact, a couple weeks ago McCreadie was approached in downtown Watertown by a man who apologized for not attending one of his benefits. McCreadie wasn't sure if he had met previously met the man, who informed McCreadie that his son was Kenny Nims, a Watertown native who stars for the national champion Syracuse University lacrosse team.

“I guess it feels good to know people like that know who I am and I'm respected as a sports figure in the area," McCreadie said.