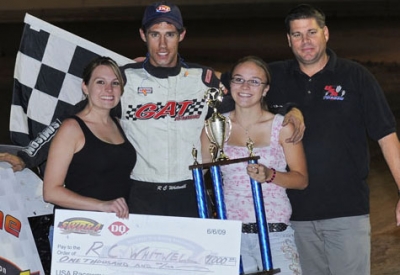 TUCSON, Ariz. (June 6) — Starting outside the front row, hometown driver R.C. Whitwell took the lead at the outset and never looked back at USA Raceway for his first career Late Model victory. A variety of spins and crashes slowed the early laps, but Whitwell, a veteran of modified racing, rolled to huge leads in racing to a $1,000 victory on the Southwest DIRTcar Racing Association.