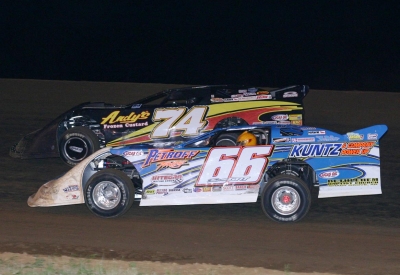 Payne, who fought off challenges from five-time MARS champion Bill Frye of Greenbrier, Ark., and Eric Turner of Springfield, notched his second series victory of the season and fifth of his career.

Frye settled for second ahead of Turner while Will Vaught of Crane, Mo., and Al Purkey of Coffeyville, Kan., rounded out the top five at the 3/8-mile oval in southwestern Missouri.

Notes: Payne's GRT Race Car has a Hatfield powerplant and sponsorship from Andy's Frozen Custard. ... The event was a makeup from a May 24 rainout. ... The event honored Springfield, Mo., native Tony Roper, who died in 2000 of injuries suffered in a NASCAR Craftsman Truck Series accident at Texas Motor Speedway. ... Next up for MARS competitors is a three-race weekend on June 26-28 starting with the first-ever series event at Brill Motor Speedway in Meeker, Okla. Other weekend events are scheduled for 81 Speedway in Wichita, Kan., and Monett with all three paying $2,500 to the winner. The events will be co-sanctioned by the O'Reilly National Championship Racing Association/