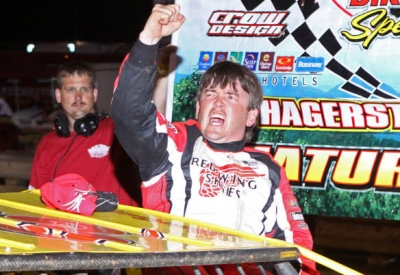 HAGERSTOWN, Md. (June 6) — Taking the lead on the fourth lap, Jason Covert of York Haven, Pa., led the final 36 laps at Hagerstown (Md.) Speedway to win the inaugural event on the Appalachian Mountain Speedweek. Covert's third special event victory of the season at the half-mile oval paid $5,000 as the seven night Speedweek kicked off by drawing a whopping 65 cars. | Slideshow

With the top two from each heat race drawing for the feature start, Covert started fourth and by the third lap was in a huddle with front-row drivers, Al Shawver Jr. and J.T. Spence, slipping past both on the same lap to take over. Setting the pace, he was 4.9 seconds ahead when eventual runner-up D.J. Myers took over second on lap 11. His dominance showed all the way to the checkered.

“I left everyone down last week with the (World of) Outlaws (at Hagerstown)," Covert said. "I didn’t give the crew the right input. I think I gave them the right input tonight.

"We built another spare car for this series. Some of the guys have been in the shop 14 straight days and we worked on this one to get it ready tool. My hat’s off to them. When the car is like that, all I have to do is drive it. Those guys do all the work.”

Shawver Jr. stormed from the outside pole to grab the lead from Spence exiting the second turn, but Covert powered into the mix and quickly made his moves past both and within two laps was 1.6 seconds ahead of Spence and by lap eight, had stretched the interval to 3.8 seconds. Covert continued on his mission all alone out front as Myers took over the runner up spot on lap 11 who was joined by Jeremy Miller.

Covert built a cushion of three lapped cars on Myers and enjoyed a four-second advantage when the race's lone caution appeared on lap 21 when Spence coasted to a stop.

Myers quickly disposed of the one lapped car that remained on the track, but Covert was starting to edge away. Nick Dickson was still holding to fourth while 13th-starting Tommy Armel got past fast qualifier Jamie Lathroum following the restart and began trying to unseat Dickson.

Covert’s distance to Myers continued to grow with each circuit as he again caught the rear of the field on lap 37 and stuck five rear cars between himself and Myers in the final laps.

“In the heat race, Jamie (Lathroum) just left me,” Covert said. “I was like 'Wow.' He’s been so good lately and I thought we had our work cut out for us, but then I drew four and that’s like negative four for me, so that was great. I usually drive from the back row. The car was good and the tires were good. I can’t thank American Racer enough for what they do for us."

“Covert was good,” said the fifth-starting Myers, of Greencastle, Pa. “I think we had harder tires on than him because he went awful good on that restart. Once he got distance on me, it was too hard for me to make up. I was glad the top three cars were on American Racers.”

“Starting spot made a lot tonight,” said seventh starter, Miller. “I think we got beat on tires tonight. We were coming and they were fading, but we’re putting the pieces of the jigsaw together. At least we got to run all 40 laps tonight. That was a big plus.”

Austin Hubbard came from 12th and got past Armel with two to go and claimed the fourth position while Armel completed the top five. Lathroum ended sixth after starting eighth.