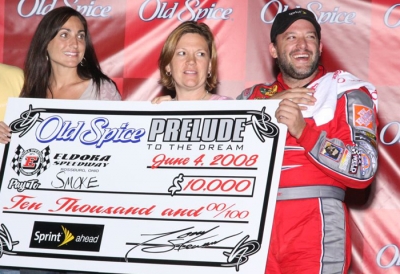 ROSSBURG, Ohio — For the past four years, some of the world’s best auto racers have gathered in rural Ohio to take on America’s premier dirt track for a chance to test their skills in a different arena than they are used to, and also to join in the effort of helping others. | Prelude practice slideshow

Racing heroes such as Tony Stewart, Ryan Newman, Kyle Busch, Jeff Gordon, Jimmie Johnson, Carl Edwards and Kasey Kahne will again journey to the heartland of America on Wednesday to compete in the fifth annual Prelude to the Dream on the high banks of Stewart’s Eldora Speedway.

The all-star race, scheduled for 7 p.m. EDT with a live broadcast on HBO Pay-Per-View, puts 26 of the top drivers in the country in 2,300-pound Dirt Late Models capable of putting out more than 800 horsepower.

And while more than 20,000 fans will jam Eldora Speedway to watch their racing heroes, real heroes — the men and women who serve and protect the United States — will benefit from the money raised. After the first four Preludes raised more than $2 million in contributions to the Victory Junction Gang Camp, this year’s Prelude will benefit four entities that cater to severely injured military personnel or fallen soldiers and their families.

“I can’t think of a better time to dig deep and help the real heroes of this country,” Stewart said. “We all understand that the economy is making each one of us consider different choices. We have those choices because of those who protect us. Everyone involved in this event is committed helping the men and women who defend our freedom. Now, we just need everyone out there to join in and be part of this special night.”

“It’s an ambitious goal, especially in this economy,” Stewart said. “But if we don’t shoot for a number that is a true difference-maker, we’re not ever going to reach it. That’s our goal, and me and everybody else associated with this event is going to do everything we can to meet that goal. Now, we just need everyone out there to purchase the event, enjoy all the action going on at Eldora, and support our heroes who are protecting our freedom.”

No doubt one of the most noteworthy observers on hand for the Prelude to the Dream will be former Eldora Speedway owner Earl Baltes, who sold the track to Tony Stewart five years ago. The 88-year-old Baltes is a dirt racing fan, but he enjoys the unusual event that brings NASCAR and other racing stars back to the short tracks.

“Eldora has seen quite a few drivers that have come in, raced and moved onto NASCAR and IndyCar racing, but never in my wildest dreams thought that I would see the day when all of them would come back and race at the same time," Baltes said. "The Prelude gives race fans an opportunity to see some of the best drivers in the world race on the dirt, which is unique in itself. I think that the idea is a great one and I look forward to the event each year.”

Although retired after 50 years as the track owner, Baltes and his wife Berneice frequently watch Eldora events from the first floor of the main tower, making sure the Stewart is maintaining the track they cultivated for years. The Prelude is an indicator Stewart is doing his job, Baltes said.

"It makes me damn sure that I put the right guy in charge of this place," Baltes said. "Tony has the passion to make Eldora strong for many years to come. With events like the Prelude and, of course, our traditional crown jewel races, the tradition of the track is sure to live on. I’m just glad that I’m still around to be able to witness some of the exciting things he’s been doing.”

Evernham made his name in NASCAR as crew chief for Jeff Gordon and later as a team owner, but he's returned to grass-roots racing in 2009 at East Lincoln and also enjoys the chance to get behind the wheel. Evernham will drive a No. 98 Rocket Chassis sponsored by Ingersoll-Rand and East Lincoln Speedway that was prepared by Wolf-Pack Racing.

‘We’re glad that Ray chose Wolf-Pack Racing to help his efforts for the Prelude and we have things moving in a positive direction. It’s just a real pleasure to work with Ray," said Wolf-Pack's Randle Chupp, who will compete at Eldora later in the week in the $100,000-to-win Dream XV. "Not only does Ray have that special knack to communicate what the car needs, he’s got some talent behind the wheel. It just makes everyone involved with Wolf-Pack proud and work even harder knowing that someone of the racing caliber of Ray Evernham sees the benefit in what we are offering to race teams."

First-year Prelude drivers are Joey Logano, Casey Mears, David Stremme and Brian Vickers. ... Jerry DePizzo, a member of the Everfine/Atlantic recording group, O.A.R., is scheduled to perform the national anthem. ... Scott Bloomquist, one of the winningest drivers in Eldora's richest events, is fielding two cars for this year's Prelude. Robby Gordon returns to drive again for Bloomquist, and Kyle Busch will also drive a Bloomquist-owned machine.

Fifth annual Prelude to the Dream