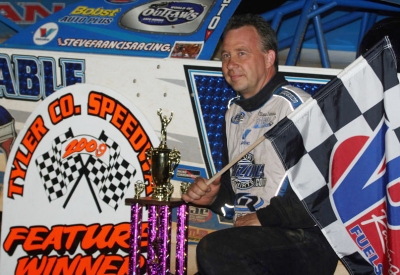 It was the second consecutive and fifth overall WoO triumph of the season for Ashland, Ky.'s Francis, whose only loss in three starts over four days came last Thursday night when he cut a tire while leading with six laps remaining at Delaware International Speedway. He salvaged a third-place finish in that event and roared back on Saturday night to score a dominating win at Hagerstown (Md.) Speedway.

“I'm just enjoying every minute of this,” Francis said of his hot streak, which has pushed him into the tour points lead by 34 points over defending champion Darrell Lanigan of Union, Ky. “When that dial's at 12 o'clock you ride it, because you don't know when it's gonna fall to six.”

Sunday night's program at the wide quarter-mile fairgrounds oval — the WoO's first event in West Virginia since October 2004 — was a prime example of how Francis and the Beitler Motorsports team have gotten completely in synch.

Francis, 41, vaulted from the fourth starting spot to second on the race's opening lap. He chased 2006 WoO Rookie of the Year Eddie Carrier Jr. of Salt Rock, W.Va., until grabbing the lead on lap 18, then turned back a mid-race challenge from Steve Shaver of Vienna, W.Va., before pulling away following the only caution period on lap 26.

Shaver finished nearly a full straightaway behind Francis's Reliable Painting/Valvoline Rocket, settling for a second-place finish in the Cosgrove Racing Rocket. It was his first WoO start of the season.

Carrier, who led laps 1-17, faded to third in the Carl Grover Motorsports Rocket. Polesitter Paul Wilmoth Jr. of Clarksburg, W.Va., scored a career-best WoO finish of fourth and Lanigan placed fifth after steering his Fusion Energy Rocket forward from the 14th starting spot and passing Josh Richards of Shinnston, W.Va., for position on the final lap.

The timing of the race's lone caution flag, which came after Clint Smith of Senoia, Ga., stopped on the inside of turn four, effectively propelled Francis to a series-best 25th career victory lane appearance since 2004.

“I seen somebody under me, but I wasn't sure who it was,” said Francis, who was threatened by Shaver after the halfway mark. “I figured it might be Shaver. I thought I knew what Shaver had put on for tires (hard-compound rubber), so it made sense that he would be coming on during a long green-flag run.

“But then the caution fell right when I needed it to. It was just the right time for me — (Shaver's) hard tires were taking off, and my soft tires were backing up.

“That just shows how everything's going well for us,” he concluded after pocketing $7,700 to move his season earnings to over $75,000. “That's all you can say about it.”

Shaver was well aware that the caution flag doomed his chances of cooling off Francis.

“I needed green-flag laps for my hard tires,” said Shaver, who earned the $500 WoO Bonus Bucks cash for being the highest-finishing driver who hasn't won a tour event and wasn't ranked among the top 12 in the series points standings. “After that caution my tires didn't really fire until the last five laps. By that time it was too late.”

Richards, who competed in a tour event in his home state for the first time since becoming a WoO regular in 2005, was unable to climb higher than fifth before settling for a sixth-place finish. Tim Fuller of Watertown, N.Y., finished seventh after battling back from a four-spot drop when he was knocked high on lap two moments after cracking the top five; Tim Dohm of Cross Lanes, W.Va., was eighth in Tracey Seymour's No. 17; Shane Clanton of Locust Grove, Ga., placed a quiet ninth; and Chub Frank of Bear Lake, Pa., limped across the finish line in 10th with a crunched hood and busted radiator after Dohm bounced onto his car on the final circuit.

The fast-paced race took just over 12 minutes to complete.

WoO competitors will be idle until June 18, when a visit to Ohsweken (Ontario) Speedway kicks off the Great Northern Tour. Eight races in a 10-day span will comprise the swing, which includes tracks in Ontario, Quebec, New York and Pennsylvania, and concludes with the $30,000-to-win Firecracker 100 on June 26-27 at Lernerville Speedway in Sarver, Pa.