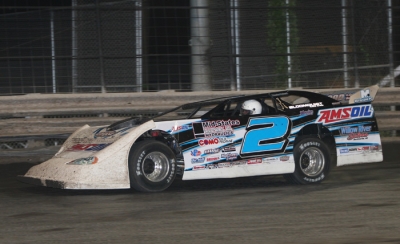 "Basically it's everything you work so hard for, and everything your crew works hard for all coming together on one weekend," Smith said. "When I pulled up into victory lane, it was still kind of like, 'Wow!' But then it all started to sink in, and I just couldn't be happier with what happened."

Polesitter Billy Moyer of Batesville, Ark., who gave up the lead to Smith after the 57th lap, settled for second with Steve Francis of Ashland, Ky., third in a race where just six drivers finished on the lead lap. Darren Miller of Chadwick, Ill., rocketed to a fourth-place finish followed by 23rd-starting Billy Drake of Bloomington, Ill., who made a late-race pass of Brian Birkhofer of Muscatine, Iowa.

Dueling with Moyer and Francis was special for Smith, who is enjoying a breakout season after regional success in WISSOTA and WDRL competition.

"These guys have done so much, and been so accomplished in this sport, and to not only be on the podium with them, but be able to outrun them means so much to me," Smith said. "I hope this is just the start of us getting somewhat, or even close to what these two have done. ... and being able to run with them? You just can't even put it into words."

Moyer enjoyed the battle with Smith, too. "It's just fun racing like that, and there was a lot of give and take out there," he said. "I'm sure there's times that Brady had to brake for me, and I had to brake for him. It was just a good clean race, and that's what this place gives you."

At the outset of the 100-lapper, last year's winner Brian Shirley took the lead and held off charges from Moyer and third-starting Francis. Shirley hit lapped traffic on lap seven and continued to hold the lead until the 22nd circuit, when he jumped the cushion in turn four, opening the door for Moyer.

Moyer held on through heavy lapped traffic and soon faced a challenge from the sixth-starting Smith. Smith led laps 28-29, but Moyer got the lead back on lap 30 amid traffic. The yellow flag came out the next time around for debris on the race track.

When the race resumed, Moyer continued to lead, but he was back into lapped traffic on the 37th circuit. On the 47th lap, Smith wrestled the lead away in turn one and held it through lap 53. Smith jumped the cushion in traffic on the backstretch and Moyer went back to the lead for four more laps.

When Moyer and Smith went three wide with Rick Eckert's slower car, Smith took the lead at the line to lead lap 58. From there, Smith worked on building a substantial lead through traffic, gaining a half-straightaway margin on Moyer by lap 63. By lap 78, Smith was lapping Shirley, who was running 10th. By lap 84, Smith had lapped up to seventh place and looked to be cruising to victory

But a yellow appeared on lap 97 when Paul Glendenning spun in turn one, erasing Smith’s nine-second lead. But Smith repelled any final challenges and took the checkered flag.

Moyer's tires wouldn't let him keep up with Smith during crunch time. "Something in our tires wasn't quite right," he said. "They just sealed up and it felt like we had about 80 pounds of air in both back tires. There's an art to tires, and I think tonight we just missed on them."

John Duty of Portland, Ore., won the C-main. Jeep Van Wormer of Pinconning, Mich., won the B-main while Darrel DeFrance of Marshalltown, Iowa, transferred from the C-main to the B-main and grabbed the final transfer spot for the feature.