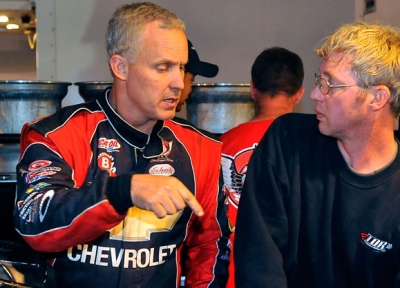 After posting a runner-up finish March 21 at Brownstown (Ind.) Speedway, veteran driver Dale McDowell of Rossville, Ga., was second in Lucas Oil Late Model Dirt Series points and appeared poised to be a major challenger to unseat four-time series champion Earl Pearson Jr. But with finishes of 10th, 16th and 25th in the next three events, McDowell is suddenly struggling and running seventh in series points.

“I feel we are making gains. We’re working extremely hard as a team to run up front. You’ve seen some inconsistency among the top runners this season so it’s not just us. We can’t worry about what they're doing. We’ll figure it out,” said McDowell, who previously won a national championship on the 1999 Hav-A-Tampa Dirt Racing Series. “When we left Brownstown last month we thought we had if figured out and we didn’t really. It’s like riding a motorcycle when you think you got it figured out: it will dump you. Everybody now days has good equipment. The cars are so even, you could be off just a little and you may not even make the show some nights."

McDowell will try to get on track Saturday as the Lucas Oil tour runs its first-ever event at Paducah (Ky.) International Raceway, a 3/8-mile oval where McDowell won on the Hav-A-Tampa circuit in '98. But he hasn't visited the western Kentucky oval in six seasons.

At PIR this year, McDowell will be behind the wheel of the black No. 17 owned by NASCAR driver Clint Bowyer. It's been a good pairing, McDowell said.

“We’ll have the car in the shop and he's always wanting to work on it," McDowell said. "He obviously wants to see us win, but he pours his heart and soul into this team. He stays on top of what we’re doing and that’s good thing. He’s a racer. He understands. He’s going through the same thing we are with a new team in Cup, and that it takes a while for it all to gel and he feels we are on our way to the consistency we are striving for.”

Plan B an option at K-C Raceway

With forecasts calling for a high chance of wet weather in southcentral Ohio on Friday, World of Outlaws Late Model Series officials have announced a contingency plan for the May 1-2 Buckeye 100. Should conditions wash out the qualifying program scheduled for Friday night, the 3/8-mile oval's WoO event will be condensed to a one-day show on Saturday night topped by a 50-lap featuring paying $12,000 to win.

“We hope that the weather allows us to run the entire Buckeye 100 weekend as scheduled,” said series director Tim Christman. “Unfortunately, Mother Nature isn't dealing us a very promising forecast for Friday, so for the sake of all the race teams and fans traveling great distances to K-C Raceway we want to have a plan in place if we are unable to run the qualifying program.

“Saturday's forecast looks much better so we're confident there will be at least one day of World of Outlaws Late Model Series racing this weekend at K-C Raceway. If we run only one day we'll have to condense the program to a 50-lap feature, but we'll offer a payout that's larger than the regular World of Outlaws purse for that distance to make the event more attractive to the teams.” — Kevin Kovac

Early entry deadline May 1 for Show-Me 100

Entries have already started to roll in for the 2009 edition of the mega-event, which will be sanctioned by the Lucas Oil Late Model Dirt Series for the first time. Entries include previous winners Scott Bloomquist of Mooresburg, Tenn., Billy Moyer of Batesville, Ark., Freddy Smith of Seymour, Tenn., Wendell Wallace of Batesville, Ark. and Ray Cook of Brasstown, N.C.

Memorial Day Weekend has become even bigger for the World of Outlaws Late Model Series. Next month's holiday tripleheader in the Midwest will now be highlighted by the Tri-State Late Model Challenge, an incentive program offering a $10,000 bonus to a driver who can win two of the weekend's three WoO events.

The lucrative bonus cash has been posted by SLS Promotions, which is presenting the three-race swing that visits U.S. 36 Raceway in Osborn, Mo., on May 22; 34 Raceway in West Burlington, Iowa, on May 23; and Charter Raceway Park in Beaver Dam, Wis., on May 24.

“We wanted to dangle a carrot out there to make the weekend even more attractive for the drivers,” said Larry Hillerud of SLS Promotions, a promotional team that annually organizes more than a dozen WoO sprint car events. “We hope the Tri-State Late Model Challenge will encourage more teams to enter all three races — and if a different driver wins the first two features, it will definitely set up a real exciting finale at Charter Raceway Park with two drivers going after the $10,000 bonus.”

With the 50-lappers at U.S. 36 Raceway and 34 Raceway paying $10,000 to win and the 40-lap headliner at Charter Raceway Park boasting a $7,000 top prize, a weekend sweep could earn one driver a whopping $37,000 including the Tri-State Late Model Challenge bonus.

WoO LMS history reveals that there's slightly less than a 50 percent chance of a driver winning two features during a swing that visits three different tracks in as many days. The series has contested exactly three events at three different tracks on consecutive days a total of eight times since the World Racing Group reformed the tour in 2004; no driver has ever swept such a tripleheader, but three drivers (Rick Eckert of York, Pa., in 2006, Josh Richards of Shinnston, W.Va., in 2007 and Brady Smith of Solon Springs, Wis., in 2008) have captured two of three. — Kevin Kovac

With just a month or so before the fifth annual Prelude to the Dream, tickets are going fast for the all-star event that sees NASCAR stars battle in Dirt Late Models at Eldora Speedway in Rossburg, Ohio.

Through late April ticket orders have been filled from 47 states, two Canadian provinces and from as far away as Australia. Stewart would love to see that statistic swell to include all 50 states.

“I’m amazed, but not at all surprised that we’ve got fans coming from 47 of the 50 states,” said Stewart, a two-time Prelude winner. “The only states we are missing are Alaska, Hawaii and Wyoming and I’d love for someone from each of those three states to come to Eldora for the Prelude so we can hit the magic number of 50.”

Tickets are available online at www.eldoraspeedway.com or by calling the track office (937) 338-3815. The event has sold out each of the previous four years.

HBO's live, commercial-free broadcast is scheduled for 7 p.m. EDT with a replay at midnight. The telecast costs $24.95 and is available to more than 71 million homes. Unlike past years, no replay of the event is planned after race night. — Larry Boos