From track, series and news reports 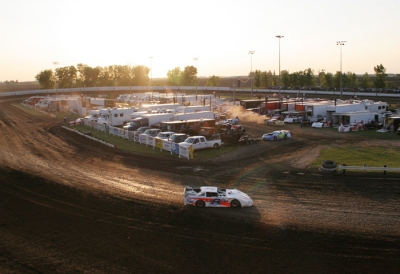 Two Simmons Promotions-operated tracks in Iowa are getting the season rolling in a big way on May 1-2 with a pair of $10,000-to-win events. Farley Speedway and West Liberty Raceway will each host Banner Valley Hauling 50s for open-competition Late Models.

"We're interested in spicing things up. A lot of times you see the start of the season dormant," Mike Becker of Simmons Promotions told the Dubuque Telegraph Herald. "We thought, why not start with a special right out of the box?"

On Friday at Farley, hot laps will begin at 6 p.m. followed by Late Model time trials, 10-lap heat races and 12-lap consolation races. Modifieds will also be in action, gunning for a $1,000-to-win purse. Adult general admission is $26.75 with children 12-and-under free.

In other news, Simmons announced that legendary announcer is Jerry Mackey is returning to his spot behind the mic at Farley, West Liberty and Dubuque Speedway. Mackey's schedule will initially be limited before returning to a fuller schedule. — From track and newspaper reports

FAIRBURY HOSTS LARRY NOURIE MEMORIAL: The May 2 Northern Allstars Late Model Series event at Fairbury (Ill.) American Legion Speedway will honor long-time Fairbury supporter and fan Larry Nourie, who died March 17. The $2,000-to-win purse for the Larry Nourie Memorial has been boosted with every feature starter receiving at least $500. The fast qualifier for the Northern Allstars will receive a $500 bonus from Roger Friedman of Dyer's Top Rods. Other giveaways and bonuses are planned with donations gathered by the track and friends of Nourie. — Erik Grigsby

CORN BELT CLASH ANNOUNCES POINTS FUND: The first-year Corn Belt Clash, an Iowa-based miniseries sponsored by Cen-Pe-Co Lubricants, has announced the postseason points fund will pay $2,000 to the champion with every driver in the top 10 receiving cash awards. “We realize that drivers have been promised things relative to point funds in the past that haven’t come to be," series promoter Cam Granger said, "so we want everybody to know that we’ve put this money aside and it will definitely be paid out at the end of the season." The miniseries includes five $2,000-to-win events starting with a June 12 event at Fayette County Speedway in West Union, Iowa. Find more information at the series website. — From series reports

VIKING INSTITUTES LONG HAUL AWARD: Viking Speedway plans to reward drivers who make lengthy drives to race at the Alexandria, Minn., track in 2009 with a weekly Long Haul award of $100 worth of fuel. The competitors who travels furthest to each weekly event will receive the award, but receipt of the honor is limited to once a month. Sponsor Pipeline Travel Plaza of Alexandria provides $100 fuel certificates for the award. — From track reports.

ODDS AND ENDS: The Northern LateModel Racing Association schedule has been released with Viking Speedway in Alexandria, Minn., hosting May 23-24 events to open the season. ... Howards Cams & Racing Components will honor two Deery Brothers Summer Series drivers $100 product certificates through a 2009 IMCA sponsorship. The series champion and rookie of the year will receive the awards. ... The O'Reilly MARS DIRTcar Series has announced the 2009 champion will receive $15,000 in 2009.