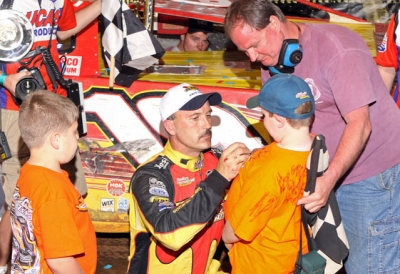 HAGERSTOWN, Md. (April 25) — Taking the lead on the 30th lap after Billy Moyer departed with a broken driveshaft, Tim Fuller of Watertown, N.Y., led the rest of the way at Hagerstown Speedway to capture his first-ever Lucas Oil Late Model Dirt Series victory. Fuller earned $10,000 in the 28th annual Stanley Schetrompf Classic at the half-mile oval where Fuller has piloted big-block modifieds in years past. | Slideshow | Video

"Anytime you can get a win with the amount of people here, I mean you've got to feel good just to get a top five. To get a win, you've made your year," the fourth-starting Fuller said. "Billy Moyer was the class of the field, and I couldn't run with him, and I saw a puff of smoke the lap before he broke. ... it was bad for him."

Eckert and Moyer started on the front row with Moyer leading early before a lap-10 caution for Jamie Lathroum, who got into the turn-two wall. Moyer sprinted away on the restart while Fuller worked past Eckert for the second spot before seventh-running Jimmy Owens of Newport, Tenn., spun in turn four to draw the second yellow flag.

Moyer stayed in control through the halfway point and had a five-length lead on Fuller when the series points leader's driveshaft broke exiting turn four. He coasted to a stop on the frontstretch, his chances for victory over.

Fuller inherited the point over Eckert, Mars, Steve Francis of Ashland, Ky., and the 14th-starting Bloomquist. Mars worked past Eckert for second on the 31st lap and Fuller was still out front when the fourth and final caution appeared on the 41st lap for Nick Dickson's driveshaft troubles.

With clean racetrack ahead, Fuller cruised the rest of the way while Bloomquist went to the outside to overtake Francis and then Eckert. Mars fought off Bloomquist's attempts to take the second spot in the final laps.