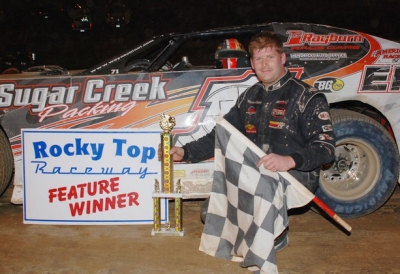 Carrier led the first 14 laps before Chinn took control on the 15th lap. Chinn led through lap 30 before Carrier slipped ahead to lead lap 31. Chinn went back out front on the 32nd lap and led the rest of the way, but it wasn't easy.

Heading for the white flag, Carrier pulled alongside the leading Chinn. Carrier stayed right with him into the final corner, but got too deep, getting into the guardrail and nearly flipping before recovering to finish fifth.

Notes: Chinn drives a Rayburn Race Car sponsored by Erwin Chrysler-Jeep and Sugar Creek Packing. ... The track drew its biggest crowd since 2007. ... Rick Combs of Cincinnati, Ohio, also competed but his order in the finish wasn't available. ... The next special at Rocky Top is scheduled for May 15. The second annual GCP Engines Twin 30s pays $2,000-to-win for the Super Late Models and $1,000-to-win for modifieds.