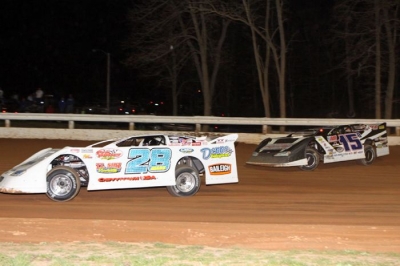 BEDFORD, Pa. (April 24) — Making his first visit to Bedford Speedway a successful one, Jimmy Mars of Menomonie, Wis., led all the way in the Bedford Valley Petroleum 50 to capture his first Lucas Oil Late Model Dirt Series since 2005. | Slideshow

Mars got the jump on polesitter Scott Bloomquist of Mooresburg, Tenn., on the first lap and fought off late challenges from eighth-starting Brian Birkhofer of Muscatine, Iowa, en route to the $10,000 victory. Billy Moyer of Batesville, Ark., was third followed by 10th-starting Rick Eckert of York, Pa., and 15th-starting Josh Richards of Shinnston, W.Va., on a night when a potent 62-car swarm invaded the 5/8-mile oval. Bloomquist, who lowered the track record in time trials, ended up seventh.

Things didn't start well for Mars early in the night at Bedford when his car's water pump broke off, getting into the radiator during hot laps. The team made repairs before qualifying and had the No. 28 humming during the main event. "The car was good tonight," Mars said. "It started out little bit tight where I kind of had to drive it more sideways than I wanted to, and it kind of hurt me a little bit at the end. But overall it was a good night."

At the outset of the 50-lapper, the front-row starters ran side-by side through much of the first lap with Mars edging ahead before a yellow appeared for a four-car tangle in turn four. Mars led Bloomquist, Steve Francis, Ray Cook and Moyer on the restart with Birkhofer taking fifth from Moyer shortly thereafter.

Mars set a steady pace out front as Bloomquist and Francis battle for second. Birkhofer continued moving forward, taking fourth from Cook on the eighth lap as the top four began to pull away with 15 laps complete.

Mars began approaching lapped traffic, tightening the margins among the frontrunners. Francis took second from Bloomquist on the 21st lap but couldn't keep touch with Mars, who had a cushion of two lapped cars at the halfway point.

Birkhofer took second from Francis on the 26th lap and set his sights on Mars. A lap-30 caution for debris erased a four-length lead for Mars, and another caution appeared 12 laps later when sixth-running Jamie Lathroum of Mechanicsville, Md., lost a driveshaft on the frontstretch.

Birkhofer gave Mars a run over the race's late stages, pulling with a car length on the final lap. But Mars was able to hold off Birkhofer, a close racing friend who often travels with Mars.

"Once in a while I could hear him," Mars said. "I figured it was my race to lose and not screw up, so that's what I tried not to do."