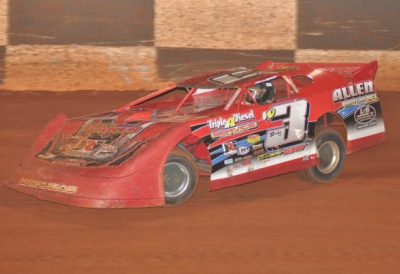 GLENCOE, Ala. (April 23) — James Ward of Lettsworth, La., inherited the lead when Hall of Famer Ronnie Johnson of Chattanooga, Tenn., pulled off the track early and went on to a $2,500 victory in the Road to Dega special on Thursday at Green Valley Speedway. Ward held off challenges from Tony Knowles of Tyrone, Ga., over the final 20 laps for the unsanctioned victory.

T.J. Alford of Ball Play, Ala., was third followed by April Farmer of Livingston, Tenn., and Doug King of nearby Anniston, Ala. Clint Smith of Senoia, Ga., started outside the front row, but he retired his smoking car before the green flag appeared.

Notes: Ward's Dickey Allen-owned car is sponsored by Triple A Diesel Service and has a Russell Baker powerplant. ... Competitors raced on new clay put down at the 3/8-mile oval. ... Travis Pennington of Winston, Ga., won the night's Crate feature. ... NASCAR veteran Kenny Wallace took the modified feature. ... The next Super Late Model special at Green Valley is scheduled for May 29 when the Southern Regional Racing Series visits.