Burgtorf races away for hometown victory 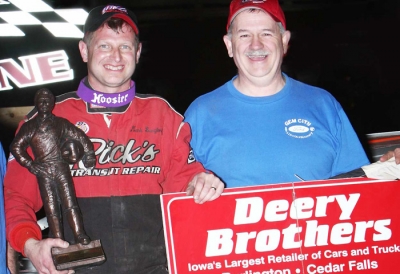 QUINCY, Ill. (April 23) — A familiar face was back in victory lane Thursday night at Quincy Raceway. Hometown driver Mark Burgtorf ran away from everybody in winning the rescheduled Deery Brothers Summer Series feature, pocketing a $2,000 check and adding to his early season lead in point standings for the IMCA Late Model tour. | Slideshow

The victory was Burgtorf’s second straight in the series, following his April 17 win at Davenport, Iowa, Speedway. Seven of his Deery career 21 checkers have come at Quincy; Burgtorf had only won back-to-back events once before, in 2001, when he went on to capture the second of his three series crowns.

Ray Guss Jr. started outside the front row and led the first 13 laps. The only cautions of the night came on laps seven and eight. The third starting Burgtorf was quick to challenge as the race stayed green, passing Terry Schlipman and then racing around Guss on the high side for the front spot on the 14th circuit.

Dealing deftly with lapped traffic, Burgtorf ran away from the field in winning by a straightaway. Guss was closest at the finish, with Jason Frankel, Jeff Aikey and Jerry Weisenberger rounding out the top five. Frankel advanced a dozen places after making the main event through a consolation race.

Forty cars were on hand for the Quincy show, postponed from April 19 because of inclement weather. With IMCA’s weekly Late Model point season set to begin this weekend, the series resumes on May 20 at Highway 3 Race way in Allison, Iowa. Burgtorf will have a five point advantage over Frankel going into that Wednesday night event. Aikey is seven points off the pace while Guss is eight points out of first.