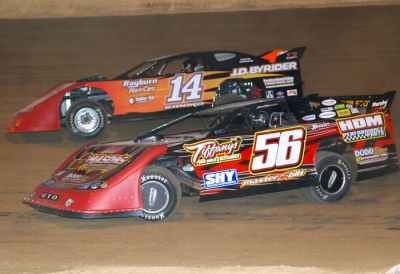 Surely two-time NASCAR Sprint Cup champion and track co-owner Tony Stewart heard the youngsters pleading for a dramatic victory celebration, but on this night, simply grabbing an elusive victory at the 3/8-mile oval in western Kentucky was going to have to be enough for fans who came to see NASCAR drivers Stewart and Ken Schrader take on their local heroes. | Postrace notebook | Slideshow

Stewart has had his share of near-misses at Paducah, and polesitter Jeff Walston of Paducah along with runner-up Kevin Cole of Harrisburg., Ill., took their best shots at Stewart before he squeaked away for a $1,500 victory.

"We've been running second and blown right rear (tires) catching the leader, we've been running third catching both leaders and blown tires or something happened. We've just had bad luck and finally we got the bad luck out of the way, it looks like, tonight," Stewart said. "It's finally nice to get a win here. This is one that's kind of gotten away from us a lot, so we're glad to get this one tonight."

Stewart started outside the front row and beat Walston into the first turn. The leader stuck with the low groove through the corners but swung wide on the straightaways to help keep the higher-running Walston at bay when he closed in near the race's midpoint. Stewart was able to clear lapped traffic easier than Walston, who eventually lost second to the fourth-starting Cole when he nearly lost control in turn two.

Cole drew within a few lengths of Stewart a few times over the final 10 laps, but Stewart managed to slip past lapped cars faster and his low groove, which looked vulnerable midway through the race, was enough to carry his orange No. 14 to victory.

Cole wondered if his tires gave up, but then considered that Stewart "was just holding back and he was just that much better. At the end, when we got to those lapped cars, and we got up to him within probably four car lengths, he took off. He was good. I mean, I felt like our car was decent. I wished it had been better. But for him not racing much in (Dirt) Late Models, he's good. He put it on us," Cole said. "If you're going to run second to somebody, it might as well be him, right?"

Never getting a glimpse of a challenger in a race slowed only by a first-lap caution for a turn-four spin by William Simmons, Stewart decided to stick with his inside groove the whole way.

"I was pretty much committed to (the bottom) once we got started there and got in a rhythm," he said. "I didn't want to have to try to go somewhere else, but I think we were good enough that if we had to move, we could've moved. I was in a rhythm and until somebody showed me somewhere was faster, there wasn't any point in me moving."

"It's been a while since Steve and I ran together, and he's the one that got me started in this whole thing, so it's nice," Stewart said. "I mean, he's as excited about it, if not more, than I am."

Barnett, driving a Joe Godsey-owned TNT Race Car, started fifth and worked his way into third before losing a few spots late, was indeed thrilled and joined Stewart in victory lane with a congratulatory handshake and a few pictures.

"Tony won and that's what we've been wanting to do. We want to win, too, and it'd have been nice if we could've run 1-2, but top five in my second night out, and Tony wins, what can I say?" Barnett said. "We've won a lot of races together, run 1-2 a lot of times, and the last couple of years we've just had some bad luck. With him winning tonight, I just had a feeling tonight was going to be the night. We made some right calls with the car that made him happy. It just worked good for us.

"I know this is going to make (chassis builder) C.J. Rayburn happy because Rayburn thinks a lot of Tony also and I know he called me two times on the way here today, worried about (the car) himself. This is a good win for C.J., also."

Notes: Stewart's winning Rayburn Race Car is sponsored by J.D. Byrider, Rayburn Race Cars and Caddies Pub. ... After Stewart and Cole, John Tindal of Fancy Farm, Ky., rallied from his 13th starting spot to finish third while 11th-starting Terry English of nearby Benton was fourth ahead of Barnett. ... The UMP DIRTcar points event drew 25 cars with the heat-race lineups set by draw and feature lineup set by passing points. ... Ken Schrader of Fenton, Mo., started third in the feature and ended up 12th. ... Brian Shirley of Chatham, Ill., making just his second start of the season, dropped out with a 17th-place finish. ... Hometown driver Tait Davenport won the Crate Late Model feature over Adam Ray, leading all 15 laps. ... Next weekend, PIR hosts the Lucas Oil Late Model Dirt Series for a $10,000-to-win event on May 2. The track is hosting a UMP-sanctioned tuneup under UMP rules for $3,000-to-win on May 1.