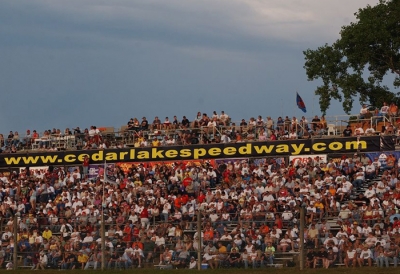 A fan-backed program to lure more Dirt Late Model racers to the USA Nationals at Cedar Lake Speedway in New Richmond, Wis., is expanding for the 2009 season. Last season, the FANS Fund provided $2,800 in donations to help Arkansas driver Bill Frye make the long journey northward, and this year's plans is to financially assist at least 10 drivers to the $50,000-to-win event, according to coordinator Rich Olson.

Contributing fans will vote on which drivers who haven't attended the USA Nationals in at least two years they'd like to see at Cedar Lake's richest event on July 31-Aug. 1, and the top 10 vote-getters will be invited to the race with a $1,000 stipend provided by the FANS Fund.

A $5,000 initial sponsorship has boosted the FANS Fund halfway to its $10,000 goal with plans to raise more contributions from fans to reach the goal. If more than $10,000 is raised, an additional driver will be invited for each $1,000 raised.

Any drivers who receive money from the FANS Fund will be asked to provided T-shirts or other items for door prizes for fans who contributed. Cedar Lake has donated the grand door prize of four VIP tickets for the USA Nationals main event.

All fans contributing to the FANS Fund get to vote for the driver they'd like to see, but fans who contribute greater amounts receive more chances to win prizes.

Details about contributing to the FANS Fund will be announced. — From staff reports

HEROES NIGHT AT SPRINGFIELD: Rain spoiled the April 18 Show-Me Racin' Series event at Springfield (Mo.) Raceway, but the track comes back with the southwestern Missouri-based Dirt Late Model tour on April 25 on Heroes Night. The track is inviting all law enforcement officials, firefighters and EMTs to Springfield with free admission for the Saturday night event, providing they bring proof of employment. The Show-Me feature pays $1,000 to the winner and four other local divisions are in action. — From track reports

PERFECT ATTENDANCE PAYS ON SERIES: Champion Brands makes perfect attendance pay off for Deery Brothers Summer Series competitors. IMCA Late Model drivers who compete at all events in the 23rd annual tour receive deluxe packages of Champion Brand products. “We were looking for a way to expand our product reach and for opportunities in that region,” explained Geoff Wright, marketing coordinator for Champion. “We want to get into the Late Model market, so this program helps us expand in the region and into a new series.” Headquartered in Clinton, Mo., Champion blends and packages fuel, motor oil and additives, and lubricants for high performance, as well as street, industrial and agricultural applications. Seventeen drivers had perfect attendance over the course of the 2008 Deery Series. — Bill Martin