From track and special reports 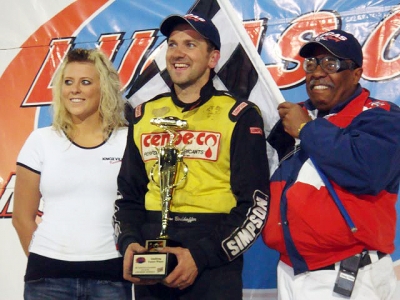 KNOXVILLE, Iowa (Sept. 27) — Former Lucas Oil Knoxville Late Model Nationals winner Brian Birkhofer of Muscatine, Iowa, rallied from the 10th starting spot at Knoxville Raceway to pick up $6,000 with a semifeature victory on the opening night of the three-night event.

Birkhofer, who overtook race-long leader Steve Francis with less than five laps remaining, fought off a final challenge from Darren Miller and staked his claim as one of the drivers to beat in Saturday's $35,000-to-win finale.

"I just did whatever I could tonight to get to the front and get some points," said Birkhofer, who won the inaugural Knoxville event in 2004. "I have fun coming here," he continued in a victory lane interview netcast on the American Dirt Network. "It's good to get one win, but obviously we want to win on Saturday night."

Francis started outside the front row and was in command most of the way, but he lost a comfortable lead on a lap-12 caution. Birkhofer started on the leader's tail and was in position to take the lead on the 21st lap. Miller, who started sixth, dropped Francis to third in the remaining laps.

Third-starting Shannon Babb was fourth followed by polesitter Josh Richards and Jimmy Mars. Billy Moyer started fourth and was in the top five midway through the race, but faded to eighth behind Scott Bloomquist, who picked up two spots in the race's final moments. (Information from live track reports and the American Dirt Network)