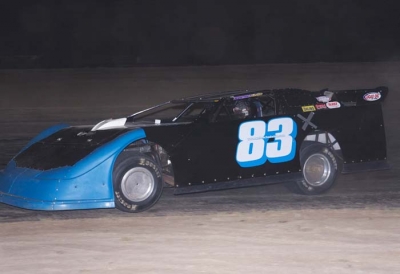 The 23-year-old Chadwick, who suffered serious back and neck injuries in a Feb. 22, 2008, modified rollover accident at Central Arizona Raceway, was dominant in his first Dirt Late Model start of the 2009 season. He was making his first Western Allstars start since 2007, when he won three series events during a four-race stretch midway through the summer.

Fifth-starting Jeff Decker of Morgan Hill, Calif., posted his second consecutive runner-up finish on the series while 20-year-old hometown modified ace Alex Stanford, making his first Late Model start in more than a year, was third in the second Western Allstars event of the season.

Stanford actually overtook Chadwick on the 23rd lap, but a spinning car brought out a yellow and reset the field. Decker was able to get by Stanford on the 24th lap but couldn't get past Chadwick.

Notes: The track surface was slick all night, but times picked up during the feature event. ... A turn-one wreck on the first lap involved Matt Micheli, Ron Bartels, grandson Nick Bartels and Chet Buckley, knocking Buckley out of the race with severe damage to his car's rear end. ... Bill Bartels dropped out 10 laps later with mechanical problems. ... Alex Stanford was third in his first Late Model start since finishing seventh on Feb. 29, 2008, at Las Vegas (Nev.) Motor Speedway's Las Vegas Dirt Dirt Classic. He used the same tires and fuel from Vegas at Chowchilla.