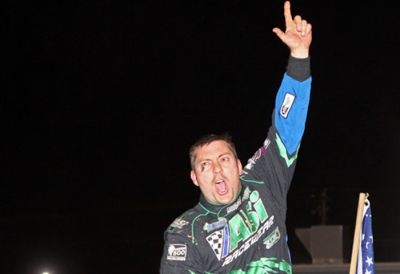 JAMAICA, Va. (April 18) — Chris Madden won one for Old Dixie on Saturday night at Virginia Motor Speedway. With Civil War reenactors dressed in Union and Confederate uniforms on hand to salute the evening's star driver in a special victory lane themed to the historic area surrounding the track, the Gray Court, S.C., driver pleased the Southern soldiers by dominating the 50-lap World of Outlaws Late Model Series Rumble on the River V. | Slideshow

Madden, 33, ran away in the feature after outdueling Jonathan Davenport of Blairsville, Ga., to assume command for good on lap 12. He was never seriously challenged in a race that was slowed by just a single caution flag, on lap 15 for the turn-four spin of Gettysburg, Pa.'s Jeremy Miller, who won last year's WoO show at VMS.

The postrace celebration was certainly a unique experience for Madden, who registered his fifth career win in WoO competition. He had a Confederate hat placed on his head as he was interviewed by tour announcer Rick Eshelman, and the soldiers feted him with a flurry of loud, smoky gunfire from their Civil War-era pistols.

“That was pretty cool,” Madden said. “I've never seen anything like that before. That kind of stuff makes winning a race even more fun.”

Steve Francis of Ashland, Ky., hustled Dale Beitler's Reliable Painting-Valvoline Rocket from the eighth starting spot to second place in 13 laps and chased Madden for the remainder of the distance, but he was 5.549 seconds behind the winner's Century Plastics Bloomquist Race Car at the checkered flag. The 2007 WoO champion spent the race's closing circuits fighting off the Fusion Energy Rocket driven by defending tour titlist Darrell Lanigan of Union, Ky., who regained the points lead with a third-place run after starting seventh.

Ricky Elliott of Seaford, Del., made a strong advance from the 12th starting spot to finish fourth in the Charles Jarvis-owned Rocket, earning him the $500 bonus as the best finishing non-series regular. Fifth place was claimed by Davenport, who started outside the front row in the D&L Rumley Rocket and led laps 1-3, 5-9 and 11 during his early battle with Madden.

The $10,100 triumph made Madden the seventh different winner in eight WoO events this season. It also gave him a win in each of his last two appearances at VMS, following his score in a co-sanctioned MACS-Carolina Clash event on Aug. 9, 2008.

“We've had a lot of success here,” said Madden, whose '08 victory at VMS came in a special topless race. “This place doesn't have the banking that (former half-mile Cherokee Speedway in) Gaffney used to have, but it has some similarities to that place. There's some driving I learned at Gaffney that I use here, and it's working for me.”

Madden, who started third, demonstrated his complete mastery of Bill Sawyer's pristine half-mile oval once he wrestled the lead from Davenport.

“We had a great race,” Madden said of his early battle with Davenport. “I got ahead of him at the line a couple times (laps four and 10), but he kept getting back by me because I was having to check up pretty hard in the middle and couldn't leave the corner like I wanted to.

“I felt like I had a better car, so I think it was just a matter of me getting to the clean air. Once I cleared him and we got to clean air, we were great. Scott (Bloomquist) has built a helluva race car when it comes to speed and driving straight and fast and that got us the win tonight.”

Francis, 41, had no answer for Madden's speed. He closed within a few lengths of Madden shortly after the halfway mark, but his car's handling was too tight and he gradually lost ground while negotiating thick lapped traffic as the race wound down.

Shannon Babb of Moweaqua, Ill., finished sixth after battling with Davenport in the closing laps. Austin Hubbard, a 17-year-old from Seaford, Del., with extensive experience at VMS, scored a career-best WoO finish of seventh, followed by Shane Clanton of Locust Grove, Ga., who entered the event as the tour points leader but exited trailing Lanigan by four points; Jamie Lathroum of Mechanicsville, Md.; and Clint Smith of Senoia, Ga.

Notes: Madden's Clements-powered Bloomquist car is also sponsored by Hamrick's of Gaffney and Allstar Performance. ... A dozen drivers finished on the lead lap with all but three of 24 starters running at the finish. ... Josh Richards of Shinnston, W.Va., who lost the WoO points lead the previous night at Fayetteville (N.C.) Motor Speedway, ceded more ground with a subpar outing. A heat-race tangle forced him to use a provisional and he struggled to a 13th-place finish. ... Thefield of 46 cars was the largest turnout ever for a WoO show at VMS. ... Twenty-four hours after scratching from Fayetteville's WoO program because of a broken rocker-arm during practice, Jonathan Davenport came back strong by recording the fastest lap in Ohlins Shocks Time Trials. His circuit of 17.416 seconds earned him a $50 bonus. ... Dennis Franklin of Gaffney won a heat and drew the sixth starting spot for the feature, but he had to relinquish the position and take the green flag from the rear because he had to park his Barry Wright house car with terminal engine problems and jump in the car normally driven by Scott Neighbors. ... VMS action will appear on the Speed cable network 8 p.m. Eastern on May 8. ... WoO competitors take a weekend off before resuming on May 1-2 with the Buckeye 100 at K-C Raceway in Alma, Ohio. Time trials and heats are scheduled for Friday with consolation races and the $20,000-to-win Buckeye 100 on Saturday.