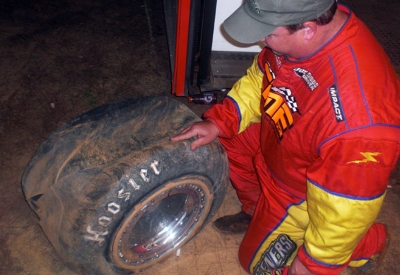 Coffey, who started from the pole position, didn't make it back around the 4/10-mile oval to finish the race because he tangled in turn two with third-place-runner Josh Richards of Shinnston, W.Va., while fighting to maintain control of his car. The 2008 WoO LMS Rookie of the Year was scored 22nd in the final rundown after losing his bid for a career-first win on the national tour, while Richards tumbled to a 23rd-place finish and lost the WoO LMS points lead in the process.

“My heart goes out to (Coffey) because I've led to the last lap here before and popped a tire myself,” said Smith, whose $10,650 in earnings included the $500 WoO LMS Bonus Bucks cash for being the highest-finishing driver who hadn't previously won a tour event and isn't ranked among the top 12 in the points standings. “Unless he really messed up bad – and he wasn't going to, because he's good enough – there was no way I was going to pass him the way the track was tonight.”

But Smith happily accepted the gift-wrapped triumph, which he secured behind the wheel of Mike Menscer's Star Leasing Rocket a comfortable distance ahead of the wild, down-to-the-wire battle for the runner-up position.

Dale McDowell of Chickamauga, Ga., finished second in NASCAR Sprint Cup Series star Clint Bowyer's machine, nipping Chris Madden of Gaffney, S.C., and Dennis ‘Rambo' Franklin of Cowpens, S.C., in a three-wide race across the finish line. McDowell slipped by both drivers going down the backstretch on the final lap in the scramble that followed the Coffey/Richards incident.

Madden took third in his Bloomquist Chassis and Franklin was fourth in the Barry Wright house car, while Rick Eckert of York, Pa., took advantage of the eventful final circuit to sneak his Raye Vest Racing Bloomquist car into fifth.

Smith, who started second, spent the race's late stages patiently waiting for something to happen to Coffey's well-worn right-rear tire.

“During that last caution (on lap 39) I looked at (Coffey's) right-rear when the lights hit it right and I could see it didn't have any tread,” said Smith, who ran American Racer tires that were a slightly harder compound than the Hoosiers on Coffey's Sweeteners Plus Rocket. “I thought he was having trouble after the restart, but I also had a little concern with my tire so I was in conserve mode. I tried to keep a little pressure on him but also take of my tires, and it worked out for us.”

“This is right there at the top,” said Smith. “Anytime we can make a good showing with the guys who are traveling for a living, it makes us feel real good.”

Coffey, meanwhile, could only mourn his missed opportunity following the race.

“With about four (laps) to go I slipped pretty good in (turns) one and two, but I thought I might've just missed the line,” said Coffey, whose fourth-place finish in last year's WoO LMS A-Main at FMS remains tied for the best outing of his career on the tour. “When I did the same thing again the next lap I knew it was my tire.

“I had seen a few guys bring out cautions with flats, so I figured mine were pretty worn out too. I thought I'd be O.K. because I was keeping the car as straight as I could, but it was bald and couldn't make it to the end.”

Coffey, 38, felt bad that his misfortune also collected the 21-year-old Richards, whose Rocket car hooked together with Coffey's as he tried to overtake the slowing machine. Both Coffey and Richards, who started third and ran quietly in the position throughout the event, were left sitting in turn two as the remainder of the field raced to the checkered flag.

Richards fell to third in the WoO LMS points standings, behind new leader Shane Clanton of Locust Grove, Ga., who salvaged a ninth-place finish after transferring through a B-Main, and Darrell Lanigan of Union, Ky., who used a provisional to start the A-Main but managed to climb forward from the 23rd starting spot to finish 13th.

Four caution flags slowed the race, including three for cars slowing with flat tires. The victims were Travis Hair of Fayetteville, N.C., and Austin Hubbard of Seaford, Del., on lap 34; Clint Smith of Senoia, Ga., on lap 37 (as he ran 12th); and Steve Francis of Ashland, Ky., on lap 39 (as he held fifth).

The only WoO LMS Rookie of the Year contender to make the A-Main was Brent Robinson of Smithfield, Va., whose 11th-place finish was his career-best on the tour and earned him his first $250 Rookie of the Race bonus.