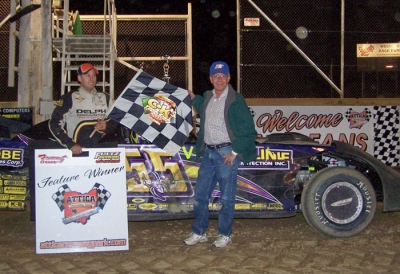 “This was a great win for us tonight,” Van Wormer said in victory lane. “My car was good anywhere, but it really took off on the high side. I have to thank my crew for all their help. We wouldn’t be here if it wasn’t for them.”

Following Van Wormer across the finish line was 22nd-starting Wayne Maffett Jr. of Mansfield, Ohio and reigning series champion Rusty Schlenk of Jackson, Mich. Matt Miller of Waterville, Ohio, a regular-season winner at Attica earlier this season, was fourth with Casey Noonan of Sylvania, Ohio, rounding out the top five.

The field of 54 was trimmed to 22 for the feature with Miller and Jon Henry leading the group to the green. On the start, Miller won the drag race into turn one, but jumped the cushion and immediately fell back to fourth. Henry took command with Schlenk, Brian Ruhlman, Miller, and Van Wormer in tow. As Ruhlman faded, the battle for second intensified as Schlenk, Miller, Van Wormer, and others swapped positions seemingly every lap.

By lap 10, the four-way dance for second quickly turned into a five-car fight for the lead with Henry turning away the challenges of both Schlenk and Van Wormer. In a wild three-wide move, Schlenk momentarily grabbed the top spot on the 13th lap then relinquished it one circuit later to a high-flying Van Wormer. Van Wormer’s time at the front of the field was short-lived as the surprising Owens of Mansfield, hugging the low groove, pulled ahead at the halfway point.

Owens would lead the field through two cautions with Van Wormer, Miller, 11th-starting Casey Noonan, and Henry following. On a lap-18 restart, Van Wormer shot to the high side and roared back ahead of Owens to reassume command of the pack. By lap 20, the provisional starter Maffett had worked his way up to sixth.

A caution on lap 26 set up a four-lap dash to the finish with Van Wormer leading Miller, Schlenk, Owens, and Maffett. Miller looked low and Schlenk looked high, each driver seeking a potential winning pass, but neither could complete the task. Instead, Maffett continued his run to the front by squeaking past both competitors. At the stripe, he would come up two lengths short of Van Wormer.