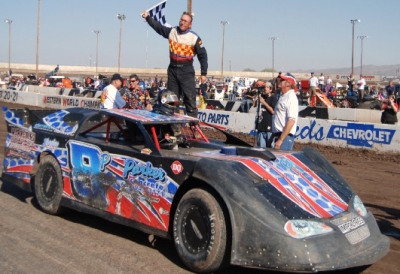 The victory for the third-starting Parker was the series-leading 57th of his career. Series rookie R.C. Whitwell of Tucson, Ariz., rallied from 17th to finish second while 16th-starting Terry Belcher Jr. of Phoenix was third. Keith Noyes of Tucson and hometown driver Anthony Madrid rounded out the top five in the race postponed until the holiday after a Friday rainout.

Notes: Parker's GRT Race Car is sponsored by Parker Concrete. ... The property at Manzanita, which hosted auto races since 1951, was sold to a crane company. ... Among those on hand for the track's final event were former open-wheel racers Lealand McSpadden and Ron Shuman, who piloted pace cars. ... Mike Tahtinen scratched from the feature lineup. ... Next up for SWDRA competitors is a May 9 event at Canyon Speedway Park in Peoria, Ariz.