Young Virginian gets to battle stars on home turf 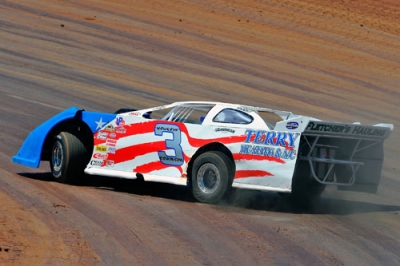 A weekend of racing on home turf has never looked so appealing to Brent Robinson. After absorbing some hard knocks during his first six races this season as a World of Outlaws Late Model Series Rookie of the Year contender, the 21-year-old from Smithfield, Va., welcomes the tour's doubleheader in his backyard on Friday, April 17, at Fayetteville (N.C.) Motor Speedway and Saturday, April 18, at Virginia Motor Speedway in Jamaica, Va.

“These two shows are going to be real big for us,” said Robinson, a personable young talent who campaigns family-owned Rocket cars sponsored by Steeltech Industrial Fabrication of Chesapeake, Va., and Terry Heating & Air Conditioning. “We've been traveling all over the country and every track we've run at I've seen for the first time, so I'm excited to finally get a chance to race close to home at two tracks I know.”

One of seven drivers signed up to chase the 2009 WoO Rookie of the Year Award (the honor is determined using drivers' 30 best finishes), Robinson currently ranks fourth in the rookie battle and 15th in the tour's overall points standings. He's entered all six of the national tour's events this season but has qualified for only one A-Main, finishing 22nd on March 13 at Deep South Speedway in Loxley, Ala.

Hitting the road extensively for the first time in his five-year dirt Late Model career has been quite a learning experience for Robinson. As if competing against the country's biggest dirt Late Model stars at unknown racetracks in Florida, Alabama, Texas and Illinois hasn't been difficult enough, he's also had to fight through some horrendous racing luck and balance his responsibilities as a student at Old Dominion University in Norfolk, Va.

But the preternaturally positive Robinson takes all the obstacles in stride, recognizing that early struggles are necessary to realize a bright future.

“It's been very frustrating to drive long distances and not be able to run the feature,” said Robinson, whose longest trip from his home in Virginia's Tidewater region has been a 1,350-mile trek to Battleground Speedway in Highlands, Texas, just outside Houston. “It's tough to keep everyone's morale up when we're not getting the results we want, but we just have to keep going. We've had ups and downs, but that's racing.

“We knew it was gonna be tough to do this,” he added. “We knew what we were getting into.”

Robinson's primary problem: starting off too many racing programs behind the 8-ball. In three of his last four WoO appearances, he's been unable to get through hot laps and time trials cleanly, effectively handicapping himself to starting spots at the back of heat races on a circuit where drivers can't cede any advantages to their competition.

On March 13 at Deep South Speedway, Robinson suffered a flat tire during time trials and didn't get a qualification lap. The following week, at Battleground Speedway, a broken driveshaft as he headed on the track for qualifying left him with no time-trial lap again. And on April 3 at Farmer City (Ill.) Raceway, Robinson arrived late for the Illini 100 qualifying night, so he got no practice and had to rush out for one time-trial lap without even having a chance to eyeball the quarter-mile oval.

“I'll be glad when school's over so I can concentrate a lot more on racing,” said Robinson, who has just a few more weeks of classes and exams before finishing his junior year as a civil engineering major at Old Dominion. “The biggest thing is, we'll be able to get to the tracks early instead of being behind from the start. That's really hurt us, especially (at Farmer City).”

Indeed, Robinson's class schedule has forced him to delay the departure of his team's hauler for races on all but one occasion this year (he was on spring break for the Alabama trip), but the Farmer City excursion was the most frustrating. Robinson's concrete-design class test at 4 p.m. on Thurs., April 2, meant his team finally headed for Illinois at 7 p.m., which wasn't that big of an issue until the rig was slowed by heavy rain and strong winds in the West Virginia mountains and rush-hour traffic in Louisville, Ky., turning an expected 15-hour drive into a nearly 24-hour marathon.

Robinson won't have to worry about long-haul travel problems when the WoO contests 50-lap, $10,000-to-win events at Fayetteville Motor Speedway and Virginia Motor Speedway, the two tracks he's run more than any others during his dirt-racing career. He made his first dirt starts at VMS as a 14-year-old Limited Late Model racer, and in recent years Fayetteville's bevy of dirt Late Model special events has made the four-tenths-mile oval his home-away-from home.

“Virginia Motor is only 45 minutes from home, but we've actually got more laps at Fayetteville (in a Super Late Model) than any other track even though it's three-and-a-half hours from our house,” said Robinson, who has four career Super Late Model victories but none at FMS or VMS. “A third in a (Carolina) Clash show in 2007 was our best finish at Fayetteville, and it's where we made our first World of Outlaws race (a 21st-place finish on Oct. 7, 2008).

“I've got pretty high expectations for both tracks. We're familiar with them, and we've got this new motor this year (built by Clements) that I'm anxious to see what we can do with at tracks we've been to before.

“With the (WoO) rookie deal taking your best 30 races, having some good finishes (at FMS and VMS) would really be great for our chances.”

The April 18 Rumble on the River event at the half-mile Virginia Motor Speedway will be especially exciting for Robinson, who will have plenty of support from family and friends watching in the grandstands.

“We have a ton of people we know coming to Virginia Motor,” said Robinson. “I'll probably have about 20 of my friends from high school and college coming to see me race. Everybody seems to have said, ‘We'll be at that one.' ”