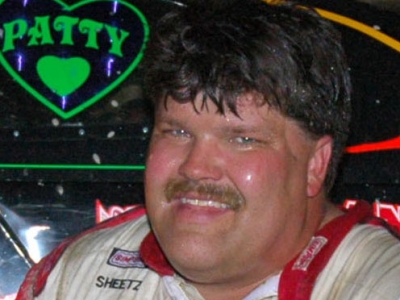 Shawn McGarvey of Coalport, Pa., a popular Dirt Late Model racer and multi-time track champion, died early Tuesday while loading logs on a semi-trailer near Patton, Pa. He was 40.

The burly driver of the No. 8P known as "Sheetz" for his love of food at the convenience store chain, was a regular at several Pennsylvania tracks during his 16-year racing career, competing primarily in weekly events but also battling some of the sport's top stars in specials.

“This just isn’t right,” said Jim Michny, owner of Dog Hollow Speedway. “He was so full of life and he always had a smile on his face. I just can’t believe it.”

Visitation for Shannon James McGarvey has been scheduled for Gibbons Funeral Home on Route 53 in Coalport on Thursday and Friday, according to the Dog Hollow Speedway website. Thursday's times are 2-4 p.m and 6-9 p.m.; Friday's times are 9-11 a.m. with funeral services to follow.

According to Cambria County coronor Dennis Kwiatowski, McGarvey was working for George W. Long & Sons lumber mill when he was crushed by a forklift after getting pinned between the boom and the roof. The coroner said McGarvey, working alone as usual, apparently fell while climbing down off the bed of the truck, hit the controls of the forklift and set it into motion.

McGarvey's survivors include wife Patty and a 14-year-old daughter, Kelli. In lieu of flowers, the family is asking for contributions made to Northwest Savings Bank in the name of Kelli McGarvey's Education Fund. News of McGarvey's death brought an outpouring of support from the Dirt Late Model community on Internet message boards. — From Terry Whetstone and (Johnstown) Tribune-Democrat reports

RICHARDS FOURTH IN NASCAR EAST DEBUT: World of Outlaws Late Model Series points leader Josh Richards of Shinnston, W.Va., posted a fourth-place finish at Greenville-Pickens (S.C.) Speedway on April 11 in his debut on the NASCAR Camping World East Series. Driving a Ken Schrader-owned car, the 17th-starting Richards was caught up in a first-lap accident but used the outside groove to rally from the tail and finish fourth in a rare asphalt appearance. "When everyone around me started piling up on the first lap and we got caught up in it, the team could've been discouraged but they encouraged me to just give it time and we were able to work to a fourth-place finish and have a clean run," Richards said. The Dirt Late Model racer, son of Rocket Chassis co-founder Mark Richards, returns to his regular ride April 17-18 on the WoO tour at Fayetteville (N.C.) Motor Speedway and Virginia Motor Speedway near Jamaica. — From team reports

BULLITT CHASSIS FOUNDER DIES: Ray Callahan, founder of Bullitt Chassis and a member of the National Dirt Late Model Hall of Fame, died Sunday at his Pekin, Ind., home. He was 71. Callahan's Bullitt cars were popular on Dirt Late Model circuits in the 1980s and '90s with house car drivers such as Hall of Famers such as Donnie Moran and Rick Aukland piloting the car. Callahan was inducted into the Hall of Fame in 2002 with a Lifetime Achievement award. Survivors include two daughters and a son. Funeral services are scheduled for 1 p.m. Thursday, April 16 at Dawalt Funeral Home in Salem, Ind. — From staff reports

GLASER FRACTURES ARM IN WILLAMETTE ACCIDENT: Three-time DIRTCar I-5 Northwest Late Model Tour champion Trevor Glaser of Tangent, Ore., broke his left arm and suffered serious lacerations in the April 11 Late Model feature at Willamette Speedway in Lebanon, where Glaser is the reigning track champion. Glaser was injured in a lap-10 accident amid a scramble to avoid the leader Bob Boyd's slowing car exiting turn four after Boyd had engine problems. Glaser underwent surgery to inspect the bone damage and lacerations, but doctors expect him to clean break to heal completely. Glaser maintains full use of his hand and fingers. — Craig Cassell

McCOY FACES YEAR SUSPENSION FROM FASTRAK: Crate Late Model racer David McCoy of Franklin, N.C., was suspended 365 days and fined $1,000 by the Fastrak Racing Series after his Crate engine was found illegal following an April 4 event at Lavonia (Ga.) Speedway. McCoy's owner of the No. 187 car, Bobby Sexton, also can't enter cars in Fastrak competition for a year. Sexton was a Fastrak-authorized engine builder through the 2008, but he can never hold that status again, the organization announced. McCoy and Sexton are appealing the decision. — From series reports

Correction: Fixes spelling of McGarvey's nickname and updates with details.