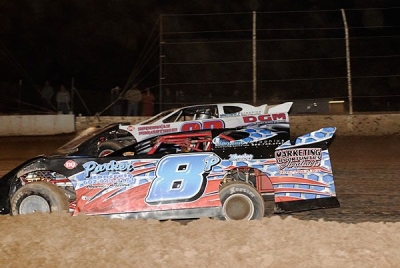 Madrid, who won last month in SWDRA action at Manzanita Speedway, settled for second after he inherited the lead from fellow modified ace R.C. Whitwell, who departed with ignition problems on the 12th lap.

California invader Nick Bartels finished third followed by hometown driver and polesitter Brad Williams. Bill Bartels, Nick's grandfather, rounded out the top five in the third race of the season on the Dairy Queen-sponsored circuit. Whitwell, who swept into the lead on the eighth lap with an outside move on Madrid, was listed 21st in the 23-car field.

Notes: Parker drives a GRT Race Car sponsored by Parker Concrete. ... Anthony Madrid has previously driven the Jeff Manka-owned as a No. 95 (the car number when it was driven by Mark Fowler). It was switched to No. 5m this time, the number Madrid typically runs in his modified. ... A lap-12 caution appeared when Brad Whitfield and Mike Clark made contact, spinning in turn four. ... Parker made his winning move on the outside when the race went back to green. ... Jerry Fincher and Wes Hall didn't start the feature. ... Art Lacy and Terry Belcher Jr. had mechanical problems in their heats but tagged the tail of the main event. ... SWDRA competitors head to Manzanita Speedway in Phoenix for an April 10 event as the track hosts its final weekend of racing. Track owners recently announced the land was sold and the venerable Southwest oval was closing.