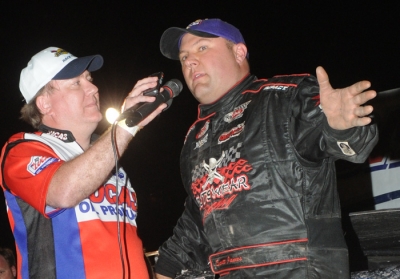 The 37-year-old driver rallied from the 12th starting spot and took a $7,000 after a barnburner of a finish as he swapped the lead with Franklin several times in the final laps. Franklin, of Gaffney, S.C., settled for second while 17th-starting Jimmy Owens of Newport, Tenn., was third at the 3/8-mile oval in southern Georgia. Josh McGuire of Grayson, Ky., and Tyler Ivey of Tallahassee, Fla., rounded out the top five in the caution-plagued 40-lapper.

"That was a heck of a race for the lead," said James, who picked up his sixth career Lucas Oil victory. "I thought at one point I gave it away. (Franklin) ran a good line out of two, but my car was starting to get hot and I thought I was done."

Franklin had his own problems while battling James. "I got the lead and then I got hit by a rock and it knocked the wind out of me for a little bit," said Franklin, who posted his best-ever series finish, "and during that time (James) was by me and then the race was over. We raced each other clean out there and my hat's off to him."

Pearson looped his car in turn one to draw a lap-three caution, and Moyer stayed in control while McGuire regained second from Lloyd on the 10th lap.

James, still on the move, grabbed third on the 15th lap and then took second from McGuire a few laps later. Up front, Moyer ran into trouble when a lapped car got sideways in front of him, causing him to check up and spin.

James inherited the lead for the restart while Lloyd, battling with McGuire for second, was the next driver to run into trouble when he lost control exiting the turn and got into the wall. That helped set up Franklin's charge into second and during a caution-free, 14-lap stretch that wrapped up the race, Franklin and James swapped the lead several times. Franklin frequently edged ahead exiting turn two, but James would move back ahead to retain control.

Franklin's last lead came on lap 36 as James erased a two-length advantage with a slide job on the leader while also sweeping past John Mason's lapped car, a move that sealed the victory.

Notes: James drives a Jay Dickens-powered Rocket Chassis with sponsorship from Powell Motorsports, Welsh Excavation and Development, Baylor Trucking, VP Racing Fuels, New Vision Graphics, Szabo Industrial, Joe Gibbs Driven Racing Oils and Integra Shocks. ... The race was slowed by 14 cautions. ... Ivedent Lloyd Jr. ran among the leaders early but was knocked out when he got into the backstretch wall. ... Sixth-place finisher Scott Bloomquist earned the PBM/Erson Cams Hard Charger honors after starting 24th with a provisional. ... Earl Pearson Jr. finished ninth and maintained his series points lead. Jimmy Owens moved up to second with Josh McGuire third. ... Fourteen drivers finished on the lead lap with 16 cars on the track at the finish. ... Among drivers failing to make the feature lineup: Donnie Moran, Brad Neat, Tommy Weder Jr., Jason Fitzgerald, Jordy Nipper, Don O'Neal and G.R. Smith. ... Lucas Oil competitors were scheduled to run a 10,000-to-win 50-lapper at Swainsboro (Ga.) Raceway, but the track cancelled the event, citing rain throughout the week. The track announced the race will be rescheduled for June 18.