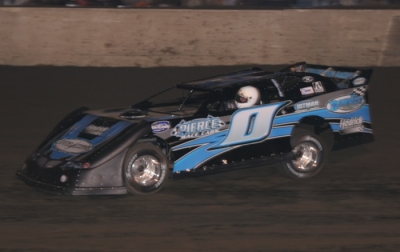 FARMER CITY, Ill. (April 3) — Josh Richards of Shinnston, W.Va., did what few drivers are able to do at Farmer City Raceway on Friday night – outrun Moweaqua, Ill.’s Shannon Babb. But while Richards beat the master of the quarter-mile oval to capture a heat race for Saturday night’s second annual World of Outlaws Late Model Series Illini 100, the 21-year-old knows he has a tough road ahead of him in the weekend’s $20,000-to-win finale. | Slideshow

“Shannon is always fast here and he’ll be the guy to beat,” said Richards, who leads the WoO points standings entering the season’s sixth event. “I just was able to get ahead of him at the start of the heat because the top (groove) was the preferred line and that’s where I started (alongside Babb on the front row).”

Richards was certainly pleased with the performance of his Rocket Chassis house car, giving him high hopes that he can pull off the richest victory of his career at a bullring he loves to visit.

“My car felt like it was pretty good,” said Richards, who has a top-five finish in four of the five WoO LMS A-Mains contested to date. “We wanted to come here and have a solid qualifying night and we did that, and now we’ll concentrate on (the Illini 100) and hopefully we’ll have everything go our way.

“I’m excited,” he continued. “This place is fun to race. It’s usually fast early in the night and by feature time you can really move all over. I think that’s what it’ll be like (on Saturday night), so we’ll have to be fast to stay up front.”

Babb, who registered the fastest lap of the 51 drivers taking time-trial circuits on Friday night (12.179 seconds), settled for second place in the first 10-lap heat. He’ll start seventh in the Illini 100, behind the six Friday-night heat winners who will redraw for positions 1-6 in the feature event. Other heat winners were Brian Birkhofer of Muscatine, Iowa, Jimmy Mars of Menomonie, Wis., Shane Clanton of Locust Grove, Ga., Richie Hedrick of Urbana, Ill., and Rick Eckert of York, Pa. — Kevin Kovac

A recap of Friday night's action:

Taking advantage of Chub Frank's troubles, polesitter Rick Eckert led the final six laps for a heat victory. Eckert fought off fourth-starting Brady Smith on a lap-four restart and the top two pulled away the rest of the prelim. Frank, the outside front-row starter who led the first four laps before a flat tire sent him pitside, rallied from the tail in the second half of the race to get third. Frank worked under Donny Walden exiting turn two on the final lap to secure the spot. Walden got out of shape and slipped to fifth behind Ryan Unzicker.

Rebounding from his 2008 Illini 100 that saw him wreck two cars, Richie Hedrick dominated from the pole, topping fourth-starting Matt Lux by less than a half-straightaway. Lux was second just ahead of fifth-starting Tim Fuller, the final of three transferring drivers. Steve Sheppard Jr. was running third in the second half of the race when he slipped off the backstretch, giving up the spot to Fuller. Sheppard ended up sixth. The first start was called back when Sheppard got sideways between turns one and two, sending half the eight-car field scrambling. Outside front-row starter Vic Coffey slipped back to fourth early and spun in turn two on the fifth lap; he retired.

Shane Clanton topped polesitter Darrell Lanigan to become the third heat winner from outside the front row. Lanigan couldn't stay in touch with Clanton as they ran the high groove, finishing six lengths back. Will Vaught was further back in the third transfer spot ahead of Dennis Erb Jr. The race ran caution-free, but the lapped car of Chas Shellenberger got hard into the turn-four wall as Clanton slid past with four laps remaining. Shellenberger never lost control and rejoined the race.

Polesittter Jimmy Mars cruised to victory, leading all 10 laps and buildiing leads of more than a straightaway on runner-up Joe Harlan. Harlan, who inherited a front-row starting spot, transferred to the feature along with two-time WISSOTA champ Zach Johnson, who battled early with Derek Chandler and held off a late charge from Eric Smith. Chandler spun on the eighth lap running sixth. Smith lost the outside front-row starting spot when he spun on the initial start, drawing a caution; with just four cars finishing and a lap-eight caution, Smith was right in the mix at the end, flashing past the flagstand just behind Harlan and Johnson.

Outside front-row starter Brian Brian Birkhofer fought off a late charger from polesitter Steve Francis to win the 10-lapper. Birkhofer was slowed by lapped traffic heading for the white flag when Francis grabbed the lead. But Birkhofer answered the move, going back ahead before the frontrunners entered turn two. Fourth-starting Jason Feger got the third and final transfer spot in the caution-free prelim.

Josh Richards jumped into the lead from outside the front row and fought off challenges from polesitter and fast qualifier Shannon Babb through the last half of the race. The top two finished nearly a half-lap ahead of third-finishing Clint Smith, the third of three drivers transferring to the main event. Teen Jimmy Dehm was further back in fourth. Two cautions waved early, first for Kerry Mathew on the initial start on then for a spin by Mike Mataragas on the second lap. Mataragas pulled into the infield on the fourth lap.

Shannon Babb of Moweaqua, Ill., who had to rally from the tail in finishing second at last year's Illini 100, is primed for an easier path to the front after topping 51 qualifiers in Friday's time trial for the World of Outlaws Late Model Series event at Farmer City Raceway.

Babb, who led the late stages of last year's evening before falling to Billy Moyer of Batesville, Ark., heading for the white flag, posted a lap of 12.179 seconds on the quarter-mile oval.

Six heat races are scheduled for later Friday evening while the $20,000-to-win main event is scheduled for Saturday night. Consolation races and a non-qualifiers' race are also on Saturday's program.

The five fast qualifiers were among the first 17 cars to qualify. ... The sixth fastest, Rick Eckert, was the 37th qualifier. ... Jon Rogers of German Valley, Ill., flipped his Out-Pace-sponsored No. 61 in hot laps in turn one. He didn't appear to be injured. ... Ted Loomis of Kingston, Ill., had steering problems in time trials. ... Steve Sheppard Jr. slipped over the turn-one banking on his first qualifying lap. ... The crowd gave itself a big cheer following the national anthem. When the P.A. recording of the anthem cut off midway through, spectators took it upon themselves to finish up with a not-quite-in-tune rendition. ... Crate Late Models are also on the card with modifieds and street stocks.