Lucrative month coming up for World of Outlaws 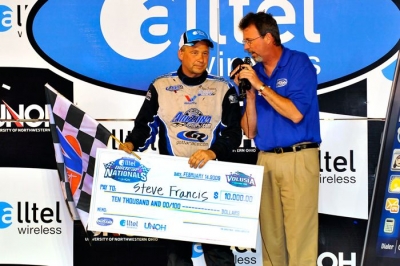 Five races. Four tracks. Four-hundred feature laps. Four consecutive weekends. A total of $109,000 in first-place cash. Over a half-million dollars in purse awards. Welcome to the Month of Money for the World of Outlaws Late Model Series.

The unprecedented early-season stretch of major events kicks off on March 13-14 at Deep South Speedway in Loxley, Ala., a 4/10-mile oval along the Gulf Coast that will make a WoO doubleheader the biggest show of its five-year existence. Two complete programs will be presented — a 40-lapper paying $7,000 to win Friday and a 60-lapper with $12,000 earmarked for the victor on Saturday.

Three more weekends featuring two-day, extra-distance WoO spectaculars will follow the tour’s first-ever visit to Deep South Speedway. The inaugural $20,000-to-win Lone Star 100 is set for March 20-21 at Battleground Speedway in Highlands, Texas, followed by the fourth annual Circle K Colossal 100 ($50,000 to win) on March 27-28 at the Dirt Track at Lowe’s Motor Speedway in Concord, N.C., and the second annual Illini 100 ($20,000 to win) on April 3-4 at Farmer City (Ill.) Raceway.

The stars of the WoO certainly realize the significance of the next four weekends on the tour’s slate.

“If you can win two or three of these big shows coming up, you can put yourself money-ahead for the whole year,” said 2007 WoO champion Steve Francis, who enters the Month of Money leading the points standings coming off a victory in the tour’s second event of ’09, on Feb. 14 at Volusia Speedway Park in Barberville, Fla. “It sure would be nice if we can put ourselves in that situation.”

Francis, 41, of Ashland, Ky., experienced a huge early-season win one year ago, capturing the Circle K Colossal 100 prize. But that was his first WoO victory with new car owner Dale Beitler and he didn’t win again on the tour until late July, so heading into this season’s rich stretch of action with a triumph already under his belt has him confident about his chances of quickly pumping up his bank account.

“I know we have a fast car that’s capable of winning any of these big races if everything goes our way,” said Francis, who will make his first career starts at both Deep South and Battleground. “But there’s going to be a lot of guys who come to these races with plenty of confidence and ready to go. I know Josh (Richards) has to have all the confidence in the world after winning at Volusia (the WoO season opener on Feb. 12) and a bunch of other races in Florida. (Darrell) Lanigan (the defending WoO champion) is comfortable and confident with his new car after running well at Volusia.

“We won the last race so we get to be the winner for four weeks until we get to Alabama, but we’ll forget about that win when we get back on the track. We just take everything one race at a time.”

The WoO will make a first-ever appearance at both Deep South and Battleground, which is reopening this season after being shuttered since early 2006. The Circle K Colossal 100 will be one of four WoO events at The Dirt Track @ Lowe’s Motor Speedway for the third consecutive year, and Farmer City will host the nation’s premier tour for the fourth season in a row.