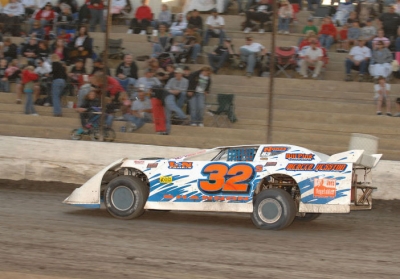 The Western Allstars DIRTcar Late Model Series is primed to accentuate its status as the Pacific Coast’s preeminent full-fender tour with an exciting slate of events in 2009. More than a dozen dates at a minimum of nine different tracks in California and Nevada make up the tour’s 2009 schedule, which was released Feb. 23. | Western Allstars schedule

The 2009 Western Allstars tour, which is set to kick off on March 28 with the Gary Jacob Memorial at Kings Speedway in Hanford, Calif., will celebrate its first full season under the DIRTcar Racing banner. DIRTcar Racing — the brand name for the sanctioning body run by the World Racing Group of Concord, N.C. — acquired and began administering the popular tour midway through the 2008 campaign.

“We’re working hard to continue building this great Super Late Model series for the teams, track promoters and fans on the West Coast,” said DIRTcar Racing Western Region Director Chris Morgan, who oversees the operation of the Western Allstars. “We’ve put together a solid, efficient 2009 schedule that realistically expands the series across the region, making it more attractive for the race teams to follow and exposing more fans to the talented drivers and thrilling action that the series is well known to provide.

“Our goal this year was to deliver a schedule that increases the geographic reach of the series and makes the championship chase challenging and intriguing, but at the same time keeps the travel demands at a reasonable level for the race teams. We’ve achieved that with the 2009 DIRTcar Western Allstars Late Model Series, and the excitement and enthusiasm in the racing community tells us we’re headed for a big season.”

“The 2009 schedule shows the growth of the DIRTcar Western Allstars Late Model Series,” said tour director Scott Woodhouse, who is beginning his second full season at the helm of the 4-year-old series. “This year we’ll be more of a true regional touring series than ever before. Rather than running multiple races at a single track, we’re bringing our show to different venues and building special events with some real value for the track promoters and fans.”

The battle for the West Coast’s most prestigious dirt Late Model title begins on March 28 at Kings Speedway with one of those premium events — the Gary Jacob Memorial, which honors a late California media representative who was well-respected throughout the West Coast racing community. The event returns to Kings Speedway after a one-year absence.

“We’re really excited to have the Gary Jacob Memorial back at Kings Speedway and serving as the opener for the DIRTcar Western Allstars Late Model Series,” said Kings Speedway promoter Frank Diaz, whose three-eighths-mile track located 40 miles southeast of Fresno is part of the tour for the third consecutive year. “The Jacob Memorial means a lot to his family and everyone in Late Model racing, and we feel that it will be a great way to get the ball rolling for the series.”

Other highlights of the ’09 Western Allstars schedule include:

• The addition of Chowchilla Speedway, which will be part of the series for the first time this season. A third-mile oval 40 miles northwest of Fresno, Chowchilla will host a pair of Saturday-night dates, on April 18 and Oct. 17.

• A doubleheader at Silver Dollar Speedway (June 19) and Antioch Speedway (June 20) built around the NASCAR Sprint Cup Series weekend at Infineon Raceway in Sonoma, Calif., which is located 150 miles from Silver Dollar and just over 50 miles from Antioch. Both tracks return to the series for the second consecutive year — and the event at John Padjen’s Silver Dollar Speedway, a 410 Sprint Car haven that will be promoted by Padjen’s son Alan Handy in 2009, will notably be held as part of the quarter-mile oval’s regular Friday-night program after last year’s first-ever series show there ran on a Saturday night.

• Trips to Santa Maria Speedway (May 9 and July 18) and Bakersfield Speedway (Aug. 15), two third-mile ovals that are the most southern California tracks on the ’09 schedule. Santa Maria held its first Western Allstars event in 2008, while Bakersfield, which hosted the entire inaugural Western Allstars slate of eight races in 2006, is the only track that has run at least one event in each year of the tour’s existence.

• A visit to Marysville Speedway for the second year in a row. The quarter-mile oval located 40 miles north of Sacramento has been widened for the 2009 season, building anticipation for the tour’s return on June 6.

• A pair of trips to Nevada for special two-day programs — July 10-11 at Great Basin Raceway (450 miles east of Sacramento) and Oct. 2-3 at Reno-Fernley Raceway (165 miles northeast of Sacramento). Both tracks are back on the schedule after hosting non-points events in 2007 and promise to add more big-show atmosphere to the 2009 trail.

Notably, officials have arranged the Western Allstars schedule to not conflict with the 12-date DIRTcar Northwest I-5 Late Model Tour, a new Pacific Coast arm of the DIRTcar action that will compete at tracks in Oregon and Washington. With the two series being designated as part of the UMP DIRTcar Racing program, drivers will have a shot at increased exposure and cash by competing for the championship of UMP DIRTcar’s new West Region and national standings.

“We’re excited to create more opportunities for our DIRTcar Western Region Late Model competitors to gain national recognition and earn post-season points-fund money,” said Morgan, noting that over $200,000 was posted for the 2008 UMP DIRTcar points fund. “Having a chance to compete for the prestigious UMP DIRTcar national and regional championships offers another incentive to the DIRTcar Western Region teams.”

A star-studded group of drivers is expected to enter this year’s DIRTcar Western Allstars Late Model Series events, which will pay at least $2,000 to win. All tour races will also offer a minimum of $400 to start – the highest figure in West Coast Super Late Model competition.

Leading the charge will be defending series champion Chris Shannon of Merced, Calif., and runner-up Bobby Hogge IV of Salinas, Calif., the tour’s ’08 and career win leader. Other contenders include 2007 series titlist Mike Johnson of Lompoc, Calif., who plans a return to the tour as part of a three-car Forster Racing effort alongside Johnny Malcolm of Corona, Calif., and Zack Forster of Bakersfield, Calif.; five-time ’08 winner A.J. Kirkpatrick of Castroville, Calif.; and the El Segundo, Calif.-based family trio of Ron, Nick and Bill Bartels.