From series, track and team reports 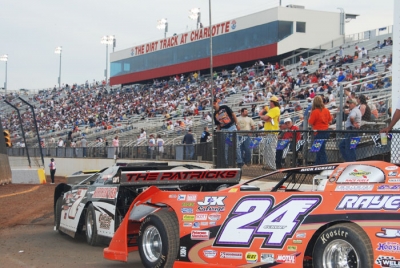 Only 36 drivers from a star-studded field will earn coveted starting spots in the fourth annual Circle K Colossal 100 on March 27-28 at the Dirt Track at Lowe’s Motor Speedway. But thanks to the introduction of the Charlotte 30 to the two-day World of Outlaws Late Model Series spectacular, 28 other entrants will have an opportunity to chase a sweet consolation prize.

Fourteen non-transferring drivers from each of two scheduled B-Mains will line up in the Charlotte 30 prior to the headlining $50,000-to-win Circle K Colossal 100. A total purse of $12,830 has been posted for the added 30-lap attraction, including a cool $2,000 earmarked for the winner and $250 for the 28th-place finisher.

“With the large number of cars expected sure to make the qualifying races very tough, a lot of very talented drivers will fall short of the starting field for the Circle K Colossal 100,” said Seamus Curley, the short-track manager at Lowe’s. “We figured that those competitors would like a chance to go back on the track, hammer it out for a few more laps and earn some extra money, so we’ve created the first-ever Charlotte 30 for them."

The Circle K Colossal 100 becomes the third major extra-distance WoO event to boast a lucrative non-qualifiers' race, joining the $20,000-to-win Illini 100 at Farmer City (Ill.) Raceway on April 3-4 and the Firecracker 100 at Lernerville Speedway in Sarver, Pa. on June 26-27.

“The non-qualifiers’ race at the Illini 100 and the Uncle Sam 30 at the Firecracker 100 have been big hits,” series director Tim Christman said. “The extra races provide an incentive to the race teams who might be on the fence about entering — and with the quality of the fields for these events, it’s like the fans get to see another feature for their ticket price.”

Even drivers who fall short of the Charlotte 30 won’t leave empty-handed, with $200 payoffs reserved for racers who do not transfer from the C-Mains. The non-qualifier money is part of the $250,000 in cash and contingency awards posted.

“We’ve really put it all out there for the competitors,” said Curley. “Hopefully the magnitude of the event we’re putting on will resonate with the drivers and fans and we’ll continue to see the Circle K Colossal 100 build in significance this year.” — Kevin Kovac

LUCAS OIL REGULARS ON ROAD TO WHEATLAND: Twenty drivers maintaining perfect attendance over the first 13 races of the Lucas Oil Late Model Dirt Series schedule can earn a guaranteed $700 bonus at each event starting at Brownstown (Ind.) Speedway on March 21 by virtue of the third annual Road to Wheatland program, the series announced. Always-present drivers who can collect the bonus include the top 10 series points finishers from 2008 along with the top 10 in 2009 points. The last of seven potential bonuses will be paid at Lucas Oil Speedway in Wheatland, Mo., where the series runs the $30,000-to-win Super Clean Diamond Nationals on May 8-9. "It takes a huge financial commitment to follow any series and we want to reward teams that commit to the Road to Wheatland in 2009," series director Ritchie Lewis said. — From series reports

DTWC NAMED OUTSTANDING SHORT TRACK EVENT: The National Speed Sport News honored the Dirt Track World Championship, one of Dirt Late Model richest events, as the Outstanding Annual Short Track Event of the Year earlier this month at the RPM Workshops in Lake Mary, Fla. DTWC promoter Carl Short, who began the race in 1981 and has held the $50,000-to-win event at several tracks including Ohio's K-C Raceway the past four seasons, said he was surprised with the honor at the gathering of race promoters from across the nation. "I want to thank the promoters who voted for this award," Short said, adding thanks for staff members who helped throughout the years. "It is an extreme honor for the Dirt Track World Championship to receive this award and it is especially meaningful coming from my fellow promoters." The DTWC's venue is uncertain for 2009 and Short has said he hopes to make an announcement by March 1. — Brian Tidball

CASEY, RAYBURN COLLABORATE ON NEW CHASSIS: Driver Terry Casey of New London, Wis., who launched his own chassis brand following his 2008 Rookie of the Year season on the Lucas Oil tour, announced he's formed an alliance with legendary chassis builder C.J. Rayburn of Whiteland, Ind., to help manufacture the Xiter Chassis. Xiter frames will be built and powder-coated at the Rayburn Race Cars shop with the assembly and development overseen by Casey, who drove a Rayburn in 2008. Rayburn cars feature swingarm rear suspensions while the Xiter will focus on a four-bar rear suspension (with the option for a combination of both suspensions). “The Rayburn and the Xiter will continue to be a separate race car,” Casey said. “The Rayburn Race Car is probably the best swingarm car out there. I have had a lot of success in a Rayburn, and I respect C.J.’s input with the Xiter, but they are a completely different race car. I started building the Xiter because I wanted to make an affordable, consistent, four-bar race car that is built with only high quality equipment.” — From team reports

PRELUDE TO THE DREAM TICKETS ON SALE MARCH 1: Tickets for Eldora Speedway's annual dirt racing play day for NASCAR standouts go on sale 10 a.m. EST on March 1. Fans can call the track at (937) 338-3815 or visit the track website to purchase tickets for the Prelude to the Dream at the Tony Stewart-owned dirt oval in Rossburg, Ohio. The website can more easily handle ticket sales, but those purchasing more than 12 seats must call the office. The $25 tickets are first come, first served and there are no renewals from previous Preludes. Tickets will be mailed after May 1. Invitations have been sent to drivers with 2009's lineup announced soon for the high-profile Dirt Late Model event. — Larry Boos