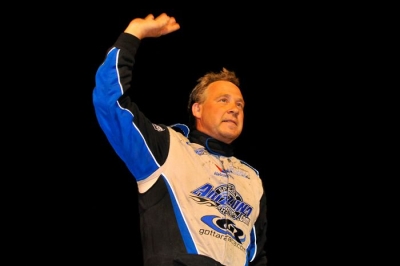 BARBERVILLE, Fla. (Feb. 14) — Steve Francis was beaming after closing the 38th annual Alltel DIRTcar Nationals by UNOH with a powerful victory in Saturday's 50-lap World of Outlaws Late Model Series event, but he had no illusions about who was the star of the week at Volusia Speedway Park. The Ashland, Ky., driver hailed his fellow WoO regular Josh Richards, who set the half-mile oval on fire by capturing the tour’s season opener on Thursday and Friday's $10,000-to-win UMP DIRTcar race.

“We might have won the last race, but nobody is gonna forget about Josh’s performance here,” said Francis. “He comes out of here the King of Florida. They had a phenomenal Florida trip.”

“The track was a little bit different tonight after the rain delay,” Richards said. “Francis was a little bit softer on tires, so he could lean on the cushion and gain some time. Everyone else was pretty much equal and had a hard time passing.”

Disappointed after failing to qualify for Thursday's WoO opener because of a heat-race crash and learning that his application for Rookie of the Year status on the 2009 WoO had been denied by vote of a panel of six veteran drivers and media members, Brady Smith turned his emotions around with a sterling second-place finish in Saturday's Speedweeks finale.

The 31-year-old headed home to Solon Springs, Wis., with a clear understanding of where his program needs to be improved before the next WoO event, on March 13-14 at Deep South Speedway in Loxley, Ala.

“We have some work to do,” said Smith, who led the first 35 laps Saturday. “We have to get a second car ready that works consistently. This one we ran (on Friday and Saturday) is our old reliable (Bloomquist Chassis) car. It’s like my honey car — she’s always reliable, always there for me. We need to get another one running just like it.”

Judging by his Speedweeks results, the Rick Eckert who won 15 WoO races from 2004 through mid-2006, including eight of the first 17 events in ’06, is closing in on making a return to his previous success.

Armed with new Bloomquist Race Cars for the 2009 campaign, Eckert, 43, of York, Pa., appears rejuvenated after being mired in a two-and-a-half-year slump. He failed to win a Speedweeks feature, but he had second- and third-place finishes at Volusia and never missed the top 10 in 15 Speedweeks starts.

“I’m disappointed we didn’t win,” said Eckert, who has a single victory in his last 102 WoO starts. “But I can look back at the last few years we were down here and think about how bad we ran, so the way we’ve run does make us happy. I’m just excited to go to the next race now. This gets us pumped up for the rest of the year.”

No WoO driver experienced a more frustrating visit to Volusia than Clint Smith, a veteran tour regular who gained attention only for jumping in-and-out of the three cars at his disposal and two near-disastrous incidents.

One year after scoring his first career victory at Volusia in the $10,000-to-win UMP DIRTcar Super Late Model finale, Smith was never a factor this year. His top finish was a 17th in the week’s first UMP feature; he failed to qualify for the ensuing three UMP events and used provisional spots to start both WoO features, with dismal finishes of 20th and 22nd sending him home 22nd in the points standings, already 76 points behind leader Francis.

Smith, who drove two of his own GRT mounts and a GRT owned by Mississippi’s Don Cliburn, narrowly escaped major problems during qualifying for two UMP programs. On Wednesday night he got squeezed into the outside wall on the homestretch early in a heat race and rode the concrete for what seemed like an eternity; he said he avoided flipping by cutting the steering wheel hard to the left to pull the car off the wall, but he had to retire with suspension damage after completing one more lap. Later, on Friday night, he pulled to the infield during time trials with flames shooting from under his car’s hood due to a flare-up caused by a loose fuel line to the carburetor, but again damage was minimal.

WoO star Chub Frank has enjoyed plenty of success at Volusia over the years, but that wasn’t the case last week.

Frank, 47, entered the week saddened after one of his two trusty Chihuahuas, Champ, was killed a few days earlier when it was hit in a Wal-Mart parking lot where Frank’s hauler was parked.

He didn’t put the despair behind him with a strong performance at Volusia, struggling throughout the meet and recording disappointing WoO finishes of ninth (Thursday) and 24th (after using a provisional to start, spinning and then retiring from action on lap 24).

Shane Clanton and Tim Fuller left Volusia in much better shape in the WoO points standings than they did one year ago. Last season both drivers dug themselves big holes in the points race, running into trouble in the two WoO events while in contention for top-five finishes. Fuller headed home tied for 16th in the standings (62 points out of the lead), while Clanton was 19th in the rankings (-84 points).

With Clanton scoring a pair of top-10 finishes in this year’s WoO shows and Fuller finishing eighth and 14th, Clanton sits tied for fourth in the standings (-18 points) and Fuller is tied for seventh (-36 points).

Fuller made an especially respectable recovery on Saturday night. He used a provisional spot and started 28th in the feature after an incorrect tire choice prompted him to drop out of his heat race, but he inched his way forward to finish on the lead lap in 14th place.

Volusia continued Fuller’s new-for-’09 deal serving as a mentor for teenage racer Tyler Reddick of Corning, Calif. Reddick, who plans to chase the 2009 WoO Rookie of the Year award, turned heads — and impressed Fuller — by qualifying through a heat race in his first-ever WoO event on Thursday (he finished two laps down in 24th), but a blown engine left the California Kid a non-qualifier on Saturday.

Vic Coffey thought he had his new Sweeteners Plus Rocket car cruising into Saturday's headliner with a solid hold on second place in the first consolation race after the rain delay. The 2008 WoO Rookie of the Year crossed the finish line to place second. But when he stopped in the infield just short of the scales, a huge cloud of smoke and steam billowed from the engine compartment of his car, filling the cockpit and prompting him to bail out until it dissipated.

“The motor blew up,” said Coffey, who went on to finish 20th in the main event after his crew scrambled to prepare his backup car. “It was running great until the last lap. Then it started to skip so I switched to the second ignition after the race because I thought that might be the problem, but it was the motor.”

McCreadie on the mend

Vic Coffey’s teammate, former WoO champion Tim McCreadie, was seen in the VSP pit area throughout the week, assisting Coffey and visiting with friends while continuing to recover from the fractured vertebra he suffered in a vicious wreck on Jan. 14 during the Chili Bowl Midget Nationals in Tulsa, Okla.

McCreadie, 34, sported a wraparound back brace and walked gingerly, but he was in good spirits despite watching from the sidelines. He said he’s hoping to get a clean bill of health from his doctors to go racing again by late April, and he expressed deep appreciation to everyone in the racing community who has donated to the recovery fund that has been established to assist with his medical expenses.

WoO Rookie of the Year contender Dustin Hapka saw his season get off to a bad start, even before he even arrived at Volusia Speedway Park. The 25-year-old’s long haul to Florida from Grand Forks, N.D., was plagued by problems at truck stops. First, when the team fueled up in Illinois, his mother’s credit card number was apparently obtained by someone there and used to make over $2,000 in purchases. (Fortunately, Mrs. Hapka had reported the possibility of a problem to her credit-card company after feeling uneasy about the transaction at the truck stop.) Shortly thereafter, in broad daylight at a truck stop in Kentucky, one of Hapka’s crewman was cornered between trucks by assailants while away from his group and robbed of his money.

Hapka didn’t qualify for a feature at Volusia, but he chalked the week up as a “valuable learning experience” and is looking forward to the remainder of his first busy season in the full-bore Late Model division.

Get out the vote

The 14 feature winners during the Alltel DIRTcar Nationals earned berths in the contest, which combines on-line and text-message voting. Fans can vote for their favorite driver once a day through Feb. 28 either on-line at www.alltelallstar.com or by texting 247253 and entering their favorite driver’s letter code.

The overall winner as determined by fan votes will receive $10,000, while the top vote-getter in the other three divisions will earn $1,000.

Next on the schedule

The WoO tour is idle until diving into an early-season Month of Money beginning with a two-day show on March 13-14 at Deep South Speedway in Loxley, Ala. Complete programs will be contested both nights at the high-banked oval — a 40-lapper paying $7,000 to win Friday and a 60-lap, $12,000-to-win finale on Saturday.